The group of Mexican soldiers were stationed on the Michoacan state highway, not far away, a gang checkpoint to collect money from farmers.

Mexican soldiers at one sandbag barricade could hear gang fighters at the other checkpoint. In the opposite direction, a rival gang patrols in pickup trucks with the group’s logo.

The Mexican army here has almost stopped fighting drug cartels, instead, they ordered soldiers to guard in the middle of the front lines, preventing gang fighters from entering the area and clashing with the enemy. together.

At their checkpoints, members of the Viagras that rule the state of Michoacan drive a truck parked across the road, next to a gun embankment covered with sandbags. Occasionally, they backed the truck to let the farmers pass, but constantly questioned how much of the goods they shipped to the market. Viagras gangs charge “forever” about 150 USD for each truck carrying lemons from farmers.

About 3 km away, another checkpoint sprang up, with homemade gunmen, pickup trucks and armored vehicles plastered with the emblem of the Jalisco New Generation (CJNG). CJNG operates mainly in Jalisco, but is trying to infiltrate the area in the neighboring state of Michoacan, causing many bloody clashes.

Between those two checkpoints is a group of Mexican soldiers, doing almost nothing.

Mexican Defense Minister Luis Cresencio Sandoval confirmed that soldiers were deployed to the area to prevent the Jalisco gang from entering the state of Michoacan. “We forced this gang to withdraw to Jalisco state,” Cresencio Sandova said.

Mexican cartels see the port of Lazaro Cardenas in Michoacan as an important hub for importing precursors from abroad for the production of synthetic drugs like methamphetamine and fentanyl.

Michoacan’s avocado orchards and iron mines were also an important source of revenue for the Viagras. Nemesio “El Mencho” Oseguera, the leader of CJNG, is keen to control these revenue streams in Michoacan.

Security expert Alejandro Hope said the Mexican government appeared to be pursuing a strategy of building a “non-aggression pact” between the gangs.

“They seem to want to control the conflict,” Hope said. “The soldiers there are not disarming either side, but only preventing the conflict from spreading. The problem is we don’t know to what extent the military is ready to act.”

In the town of Aguililla, which is considered the head of the CJNG gang, local residents were angry at the indifference of the Mexican military. In June, they drove bulldozers to block both entrances to the barracks, locking up nearly 200 soldiers there for four months. The Mexican army had to deliver food to soldiers at this barracks by helicopter.

Residents of Aguililla vowed not to let Mexican soldiers leave the barracks until the army cleared the Viagras checkpoints, which had caused them so much trouble. Several locals died when the ambulance carrying them was stopped at a gang checkpoint.

“Why doesn’t the army move forward? Why don’t they send helicopters in anymore,” said a farmer in the village of Taixtan, near Tepalcatepec. This man pointed down the sorghum field that he could not come to harvest for fear of CJNG snipers lurking in the nearby hills ready to open fire at any moment.

Feeling abandoned amid the gang’s bullets, the farmers in Tepalcatepec formed a number of self-defense teams to fight back. “Army soldiers haven’t fired a single shot since they got here,” said a farmer who is a member of the self-defense team who regularly exchanges gunfire with the CJNG.

It is not clear where the Tepalcatepec self-defense team got the bulletproof vehicle and AR-15 rifle, many believe that the Sinaloa gang sent them to arm them in the fight with the CJNG.

“Two gangs are fighting here, the military should do its job and fight both sides if necessary,” said Jose Francisco, a farmer who helped block the door of the army barracks in Aguililla. “They shouldn’t take sides in the gang war.” 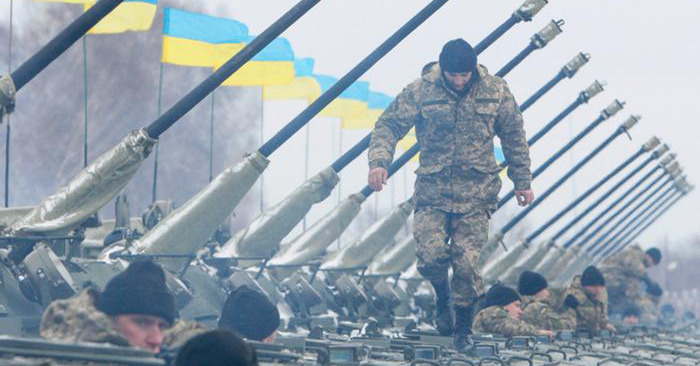 The US plans to evacuate citizens from Ukraine, prepare for a bad situation