“Lots of families go on vacation, but only 2-3 couples really love each other. Some families, parents and children, swear at each other,” an employee said.

What the guests present on the superyacht have the most is money, and the only thing they care about is that all requests are fulfilled. Below is the sharing of 3 service staff on luxury yachts about the downsides of wealthy travelers.

“My boss, who is also a yacht owner, once asked six of our staff who was the richest guest on board, and which beautiful girls were actually escorting those gentlemen,” said Nicole. , 23 years old, opens about memories on the ship used to work 4 months last summer.

In May, thanks to the recommendation of an acquaintance, Nicole flew from London to Milan, then took a car to Portofino, a fishing village on the Riviera, Italy. Here, she worked for 4 months on a yacht and served 12 guests.

The guest bedroom is very luxurious, with a king size bed and soft feather pillows. Everything around is inlaid with gold, marble and wood. In the same position, but below deck, 6 waiters had to sleep in small and cramped bunk beds.

Each shift lasts 18 hours a day. Her hands were cracked from having to wash dishes all the time. Nicole and colleagues always have to look neat and tidy and have to put aside all egos before the requests and complaints of “thick-wallet” guests. Chefs work non-stop, serving food for parties that seem to last forever.

Guests would make all sorts of odd requests, which the crew had to respond to immediately. A super-rich guest wants to eat sea urchins for lunch, and the team must complete this mission at all costs, even though they don’t know where to find it.

After five consecutive birthday parties for a guest, the ship left Italy for Spain and then Ibiza, the main destination for this year’s summer vacation. Here, 12 guests had other jubilant parties all night. They also welcomed a number of other wealthy personalities from the neighboring yachts.

“As the guests partyed all day and they started commuting between the two yachts, we had to move too to accommodate. One of the female guests went on a quick date with a wealthy guest of ours. The boat was inside for 10 days. On the 11th day, this guy’s fiancee got on the boat, the other female guest returned to our boat. All staff on both sides had to keep the matter a secret, and pretend nothing happened. happen,” Nicole said.

After two months in Ibiza, Nicole went to Monaco. This is the last anchor point on this summer’s trip. She returned to London in September, with her four-month summer salary and tips from guests. “What I’ve found is that the rich guests are also surprisingly stingy,” Nicole said of the tip she received.

Gina Pane (Spain): ‘You can get fired because the customer… like it’

Gina’s workspace, 38, is on 60-meter yachts that cruise around southern France and Italy. Like Nicole, Gina also often ignores the love triangle of the ship’s guests and other stories.

“I’ve seen countless families travel over the years and only about 2-3 couples really bond and love each other. Some families are really horrible, parents, children yell at each other. A guest my father’s age forced me to fire the chef and other colleagues, just because he burned his mouth from eating hot shrimp.”

In fact, you can get fired for anything the owner or guest “likes” to do, like being too fat, having the wrong hair color, or not looking good. Besides, the requests of the guests are equally ridiculous: drink fresh mango juice from mangoes that have not been touched, eat only fish they caught from the sea but cannot catch. So the crew had to sneak a fish from the local market, then dive in and attach it to his hook. Another guest was not satisfied with the sound of the TV on the ship, directly threw the remote into the sea, despite having to pay more than $ 3,400 in damages.

However, Gina received a decent tip after a year of serving difficult guests. The salary and tips help Gina pay off most of her home in Mallorca, Spain. A few years ago, her starting salary was $3,000 a month and increased over time. Currently, she makes 8,100 USD a month, excluding tips. The biggest tip she received was $7,000 for two weeks of service on a ship owned by a Russian tycoon. After nine years at sea, Gina is ready for life on land. Working 18 hours a day left her exhausted, her hair falling out, and her hands cracked from washing too many dishes.

Nicola Burgess (UK): ‘They asked for a fresh pine in October’

Nicola used to be a crew member, and her husband was a chef. Nicola’s first working session couldn’t have been better. She served on a ship moored at Cannes on the occasion of the Film Festival. Thanks to that, Nicola was able to see with her own eyes Ryan Gosling and J-Lo partying on the yacht next door organized by Donatella Versace.

But in the following days, she also met many difficult guests. Nicola said: ‘A bizarre guest asked us to decorate a real pine tree on the ship – it was October – and must keep it fresh until December.

Another difficult customer always made the staff arrange everything on the table and then ordered only one omelette. “One day, when I was cleaning the cabin, he called me upstairs and asked to pour him water. What’s worth mentioning is that the water bottle is right in front of him.” But in return, this guest’s wife is lovely. She once invited Nicola to lunch.

In return, the financial rewards for Nicola are quite generous, she receives more than 2,000 USD per week in tips. “The most amazing thing is the moment our ship is floating and surrounded by dolphins and whales crossing the Atlantic Ocean. I used to sit under the starry sky, and met my husband now on a cruise. boats in Italy”.

But even with life, no matter how much money and interesting it is, 4 years ago, the couple still decided to “retire” and return to the mainland to live. For them, the years of floating on the ocean and serving such difficult guests were “more than enough”.

Wild anemone blooms in the suburbs of Da Lat

Becoming husband and wife after dozens of trips together 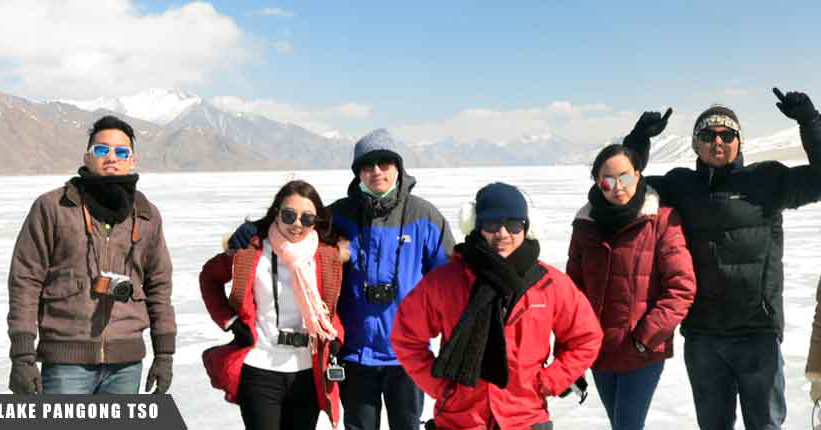