HanoiVietnam lost to Japan 0-1 by Junya Ito’s goal, in the fifth round of Group B, the third qualifying round of the 2022 World Cup in Asia on the evening of 11/11.

Not surprisingly, Japan pressed the pitch for most of the time, controlling 67% and finishing more than twice as much as the host. Vietnam also shot six times but most of the situations came from outside the penalty area, and the quality of the finish did not pose a danger. There was almost no time when Vietnam showed signs of being able to score, when Japan kicked firmly. The away team also did not put all their efforts to score more goals, and once again Vietnam lost close to Japan, in the last three confrontations.

Ito’s 17th-minute goal made it much easier for Japan to kick, in the context that many pillars could only practice one session before the match because of a flight delay. Star Takumi Minamino was among these, but he still started and even assisted Ito to score. The goal came from striker Yuya Osako’s shield, before he poked a slot for Minamino to escape to the left. Liverpool midfielder ran faster than Duy Manh, then stretched right across Ito to hit the cushion into an empty net.

Vietnam only once shot towards the goal, coming from Cong Phuong’s corner kick, causing goalkeeper Shuichi Gonda to punch out in the 40th minute. Immediately after this phase, Cong Phuong failed to pass the corner, leaving Japan quick counterattack. Ito escaped down the left flank, overcame him and then shot to the close and high, knocking out Tan Truong.

Coach Park sat lazily leaning against the training cabin, but VAR appeared to save the host. Ito was not offside when he received the ball, but when he shot, Tanaka ran down and was narrowly offside. The ball grazed Tanaka’s head and then went into the net, and VAR asked the referee to review the situation to decide. Referee Hassan Mohammed decided to deny this goal of Japan.

Japan showed no signs of weakness in the second half, but they kept the ball for more than 70% of the time. This makes Vietnam’s opportunities reduce. Coach Park Hang-seo tried to show off his military skills when he brought Phan Van Duc, then Nguyen Van Toan into the field. But these two players did not make a mark, and even Van Duc was substituted in the 84th minute after a few phases of losing the ball.

Luong Xuan Truong, Ha Duc Chinh and Nguyen Thanh Chung also entered the field, respectively, but did not make a difference because of the level difference. About the last 30 minutes of the game, Japan kept the ball firmly and slowed down the game. The last chance for Vietnam came in the 89th minute. Van Toan brought a valuable penalty for Vietnam. Xuan Truong hung on and the ball staggered, but the Vietnamese player could not shoot. The ball bounced off and Thanh Chung released it to let Xuan Truong shoot over the bar.

Vietnam suffered a fifth consecutive defeat in the third qualifying round of the 2022 World Cup, and finished at the bottom of the table. And Japan rose to third with nine points, not counting the results of the China – Oman match.

Park’s teachers and students will wait for five days before receiving Saudi Arabia also in My Dinh, at 19:00 on Tuesday, November 16. And Japan continues to move to Oman as a guest. 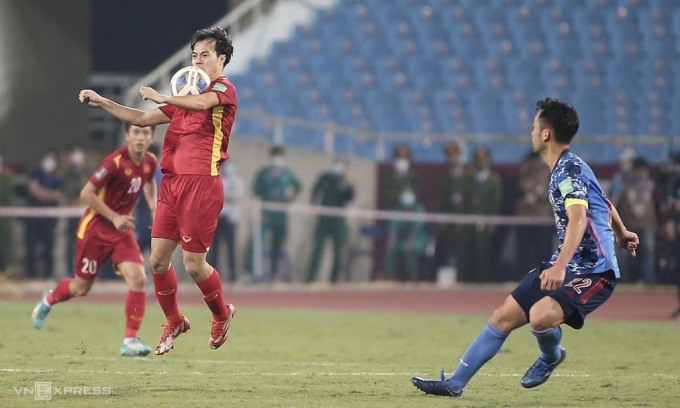