The new generation Mercedes-Benz S-Class has just been announced in the Vietnamese market and has 2 versions with a starting price of VND 5,199 billion.​

Entering the new generation, both Mercedes-Benz S 450 and S 450 L versions are imported directly from Germany, the selling price is about 1 billion VND higher than the old assembled generation. Vehicles come with a 3-year warranty or can be extended to 5 years.​

The Mercedes-Benz S-Class is completely redesigned in terms of design, with a short front wheel nose, large wheelbase and harmonious rear wheel rear end, the S-Class has the perfect proportions of a saloon. classic. The large wheelbase combined with the wheels placed close to the outside gives the car a superficial appearance.​ The front end of the Mercedes-Benz S-Class is equipped with the signature 3-point daytime running lights of the S-Class with a flatter and neater design. Multibeam Led technology front light cluster uses 84 LED bulbs. The door handle hidden in the body is a completely new equipment on the S 450 and S 450 Luxury, which can be automatically raised electrically when the driver touches the door handle, integrated with the KEYLESS smart key function. -GO. In the event of a collision, the door handle will also automatically raise for safety. 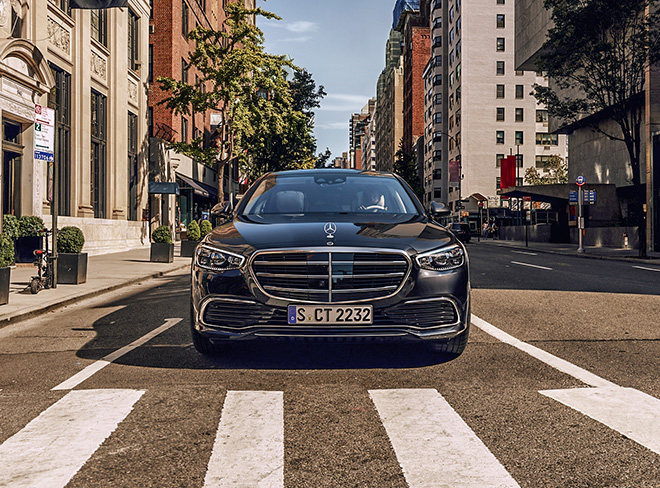 The new generation Mercedes-Benz S-Class interior is luxuriously designed with many modern technologies. In the new generation, the S-Class harmonizes digital technology and traditional luxury materials. The reduction in the number of buttons emphasizes the minimalist style of the interior. The S 450 is equipped with Nappa leather seats, while the S 450 Luxury is upgraded to Nappa Exclusive seats and an Exclusive interior package.

Not only have up to 5 screens on the S 450 Luxury version, the interior of the S-Class is also impressive with the decorative surface of the dashboard with metallic fiber on the S 450 Luxury and open-pore wood paneling on the S 450. The 12.3-inch digital dashboard has 4 different styles (Discreet, Sporty, Exclusive, Classic) and 3 modes of use (Navigation, Assistance, Service). The large 12.8-inch OLED central screen runs the latest 2nd generation MBUX system. The interior has the number of LEDs increased from 40 to 263 and has a maximum brightness of 200 candela/m2, 10 times more than the previous generation. Depending on the ambient light, the system will automatically change the day and night modes. Up to 64 colors and 20 different brightness levels are selectable via MBUX or the “Hey Mercedes” command.

In the high-end S450 Luxury version, the car has many high-class amenities such as rear seats with massage function, interior lights, panoramic sunroof. Especially the MBUX gesture control system. This system works through the cameras on the roof panel and the self-learning algorithm, the MBUX gesture control feature on the S 450 Luxury has the ability to recognize and predict the intentions and desires of the customers. passenger. The system can analyze hand movements, head movements and body language to give commands in response to the respective functions on the vehicle. 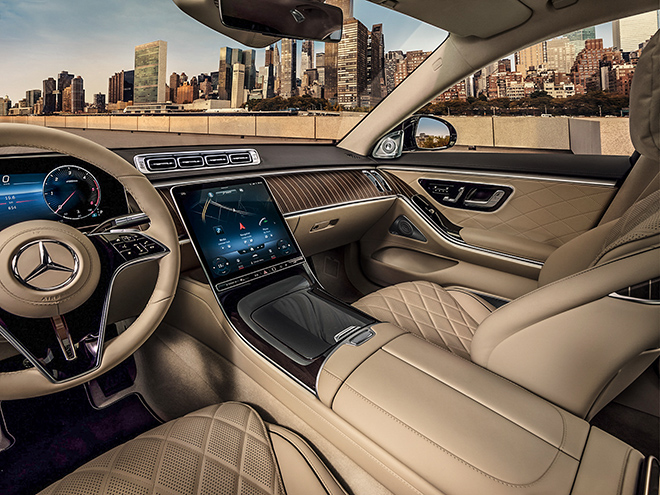 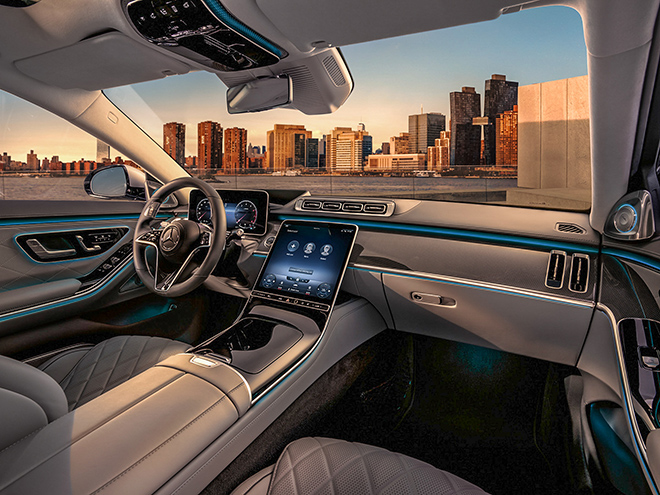 Both S-Class versions are equipped with a 3.0L in-line 6-cylinder petrol engine block, integrated with a mild-hybrid MHEV (EQ Boost) powertrain, code M256, for a combined capacity of 367 horsepower and maximum torque of 500Nm. Power is sent to the rear axle (RWD) – without 4MATIC all-wheel drive, through a 9-speed automatic transmission (9AT). 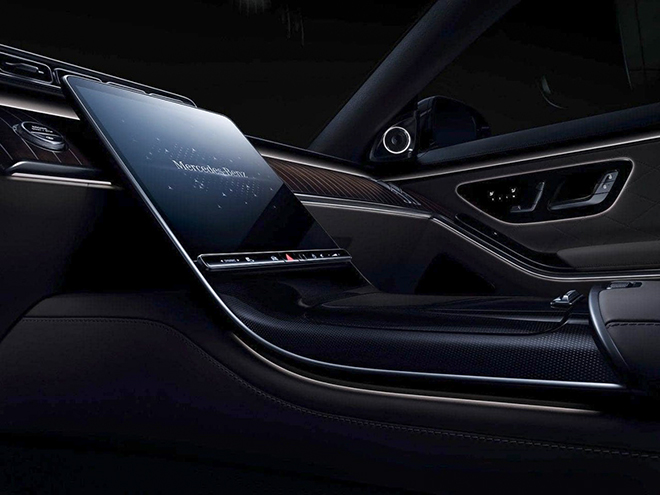 Depending on travel speed and steering angle, the rear axle can rotate in the same direction or in the opposite direction as the front axle. As a result, the minimum turning radius of the S 450 Luxury is reduced to only 5.85 m while the body is more stable when changing lanes at speeds above 60 km/h.​

Mercedes-Benz S-Class continues to be the top choice in the large luxury sedan segment in Vietnam. Mercedes-Benz S 450 and S 450 Luxury have been officially present at MBV’s genuine dealer network nationwide and are ready to be delivered immediately to customers. 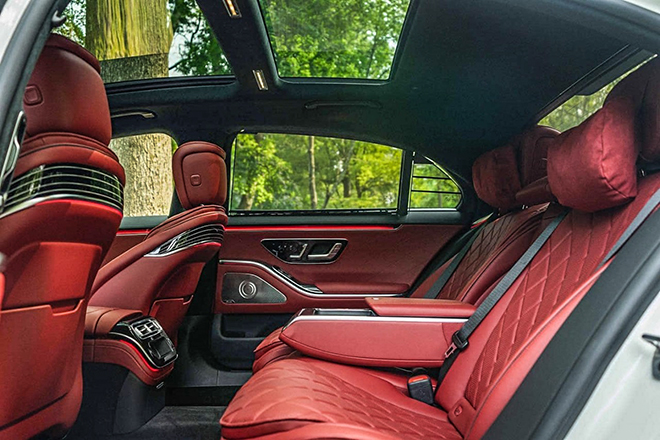 Although the new generation S-Class 2022 has had an increased price of 780 – 900 million VND compared to the old locally assembled version, the S-Class 2022 brings many changes in design and modern technology that promises to continues to attract Vietnamese customers, maintaining the top selling position in the large luxury sedan segment in the Vietnamese market.

In addition, MBV also organizes a series of online events Mercedes-Benz Vietnam Virtual Show – BEYOND which will be shown to all audiences at 19:00 every day from November 25 to 28, 2021 with new themes. turns as follows:

– Day 1 – Luxury. Sophisticated: A 100-year transition of refined luxury to Mercedes-Maybach standards, and especially the most anticipated appearance of the year from the new generation Mercedes S-Class.

– Day 3 – Luxury. Motion: Emotional rhythm with every movement in the world of Mercedes-Benz.

The selling price of genuine Mercedes-Benz S-Class 2022 is as follows: 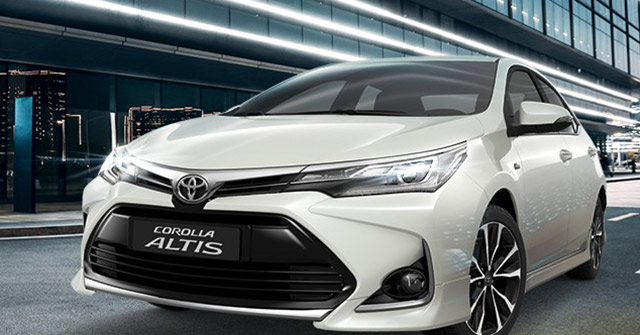 Receive incentives up to 84 million VND

Ferrari’s first SUV model was caught on the test track 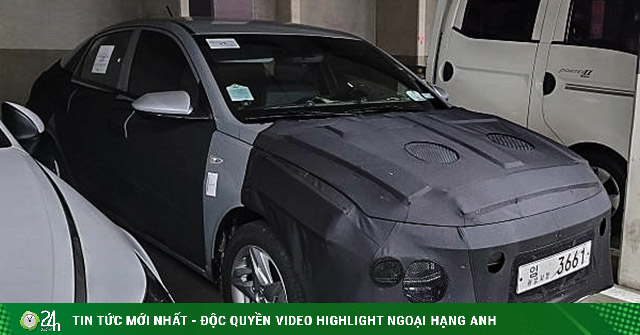