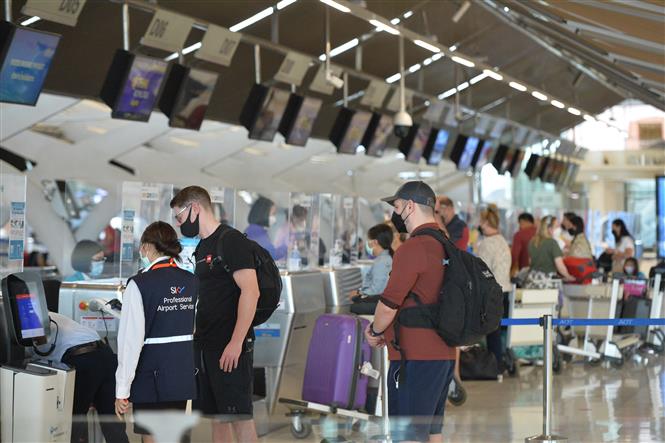 According to the statistics of worldometers.info, as of 23:59 on January 14, countries of the Association of Southeast Asian Nations (ASEAN) recorded an additional 63,443 new cases of COVID-19 and 281 deaths. The total number of cases in this region has so far exceeded 15,554,700 cases and 309,669 deaths.

The appearance of the super-infectious variant Omicron has caused many Southeast Asian countries to ban the entry of foreign tourists, delay the reopening plan and urgently increase epidemic prevention measures. Currently, at least 9 ASEAN countries have recorded Omicron infections.

On January 14, the Philippines recorded an unprecedented increase in the number of new cases, leading the whole bloc with over 37,000 cases. Vietnam ranks second in Southeast Asia with over 16,000 new cases and 171 deaths.

Meanwhile, Thailand is also a hot spot in Southeast Asia, the number of community infections remains high. “Land of the Emerald Buddha Temple” on January 14 recorded more than 8,000 new cases and 15 deaths.

Cambodia’s epidemic continues to be in remission, with 10 new patients and no deaths in the past day. Cambodia is considered to have passed the peak of the epidemic. Facing the new situation, “The land of pagodas and towers” is gradually easing social distancing and has reopened the country.

Meanwhile, the epidemic in Laos is developing unpredictably, the total number of cases has exceeded 123,000, the number of new cases is over 1,000 cases per day, the number of deaths in the “land of millions of elephants” in the past 24 hours is 5 cases. fit.

Overall, the bloc as a whole is facing the Omicron threat, causing a sharp increase in the number of cases, but hopes of overcoming the pandemic have begun to appear in some member countries. In the past 24 hours, 9 out of 10 ASEAN member countries recorded new COVID-19 cases.

The Lao Ministry of Health on January 14 said that in the past 24 hours, the country recorded 1,052 new cases of COVID-19 and 4 deaths.

The ministry’s announcement stated that after a few days of maintaining at 3-digit levels, the number of new COVID-19 cases in Laos on January 14 returned to 4-digit levels, an increase of 247 cases compared to January 13. . In which, the capital Vientiane continues to lead the country with 400 cases, followed by Phongsaly province with 102 cases. Up to now, the total number of cases in Laos has reached 123,293, including 476 deaths.

The Lao Ministry of Health urges people who have not been vaccinated or want to get a booster shot (3rd dose) to quickly go to designated hospitals and centers for vaccination to protect themselves and the community. According to official statistics by the end of January 13, the number of people who received the first injection in Laos reached 63.21% of the population, while the number of people who received the second injection reached 51.3%.

The Indonesian government has lifted the entry ban for citizens from 14 countries with many cases of Omicron variant, citing strict anti-epidemic measures in Indonesia and the importance of allowing travel activities. between countries for economic recovery.

In a statement on January 14, spokesman for the Indonesian Government’s COVID-19 Task Force Wiku Adisasmito said the decision was made because Omicron has spread to 150/195 countries and territories across the world. world. According to him, maintaining the entry ban will make it difficult for cross-border travel activities that are essential to maintaining the stability of the country and economic recovery. The open-door policy for international tourism was made based on the results of the meeting on January 10 and was issued in the circular of the Task Force to combat COVID-19.

In addition to lifting the above entry ban, the Indonesian Government will apply a 7-day quarantine for all people entering the country from January 12. According to Mr. Wiku, this entry quarantine regulation was made based on the results of scientific research in many countries, according to which the average incubation period of Omicron infections is 3 days.

In order to limit the impacts caused by Omicron as well as help people return to work faster, the Philippine Government has also shortened the isolation period for people with mild symptoms from 10 days to 7 days. day.

In the context of the increasing number of new infections, the Philippine capital Manila government decided to stop online teaching for a week, until January 22, in order to reduce the “burden of health”. ” for teachers and students. Statistics show that currently thousands of teachers and students have COVID-19.

The decision to suspend online teaching comes days after the Philippine Department of Education gave schools across the country the option to suspend teaching for two weeks this month amid the widespread spread of the Omicron variant. .

Currently, only about 50% of the Philippine population has received the full dose of the basic vaccine. In order to revive the economy ravaged by the epidemic, from October 2021, the government of this country eased restrictive measures, after the wave of COVID-19 infections, mainly due to the Delta variant, peaked. Before Christmas last year, the number of new infections dropped to a few hundred cases a day, but then increased again as people met each other during the holiday.

On January 14, Cambodia began deploying the fourth dose of COVID-19 vaccine to priority groups in the capital Phnom Penh in the context of the Omicron variant spreading in the community.

According to the Cambodian Ministry of Health, priority groups for the fourth dose of COVID-19 vaccine include front-line medical workers, the army, police, the elderly and senior officials.

Cambodian Prime Minister Samdech Techo Hun Sen on the same day injected the fourth dose of the vaccine at his residence in the southern city of Takhmao and urged people to get vaccinated against COVID-19 as soon as it was their turn. Prime Minister Hun Sen said that there is no better option than getting vaccinated against the disease and implementing “3 should, 3 avoid” as recommended by the Ministry of Health of this country. Accordingly, 3 things to do are wearing masks, washing hands often and maintaining a distance of at least 1.5 m, while 3 things should be avoided are closed and narrow spaces, crowded spaces and close contact. .