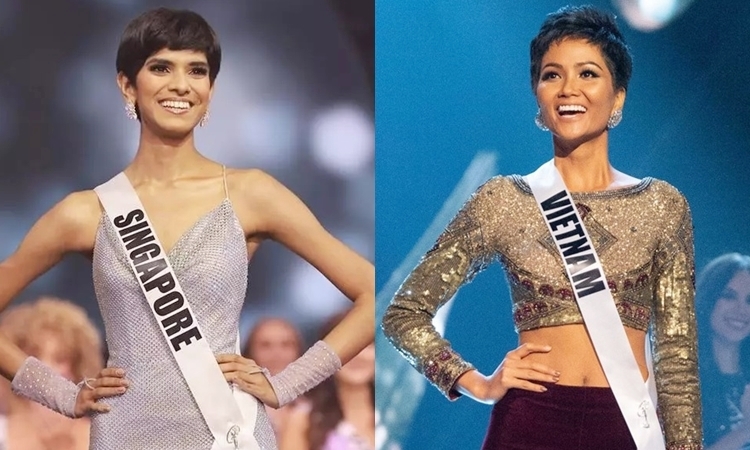 Nandita Banna – Miss Universe Singapore 2021 – said she cut her hair short because she was inspired by H’Hen Niê.

During the live stream on her personal page, the beauty said that since she changed her hairstyle, she was repeatedly commented on like American actors Halle Berry and H’Hen Niê. Miss Vietnam is the one who changed her appearance.

Nandita said: “In 2018, H’Hen Niê entered the top 5 of Miss Universe. She was really an inspiration to me and my creative director Daniel Boey. Daniel Boey said that watching her walk was an inspiration to me. strong, sharp. She stands out from the crowd simply thanks to her hair and personality that pops out.”

Nandita said that H’Hen Niê once praised her hair and appearance. “Kim Duyen called and texted H’Hen Niê because they were very close. I was very surprised when Hen complimented me. She said she liked my hair and look. I am very happy because she is the source. My inspiration,” she said. Nandita knew and became close to Kim Duyen when participating in Miss Universe 2021.

Miss cut hair at the end of October last year, before going to compete in Miss Universe. She told Missologgy: “The first time I had my hair short. It took a while to get used to but now I think it’s really cute”. On social networks, many viewers praised her as beautiful. Miss is expected to keep her hair cut for a year. Then she considered changing to find the difference.

Nandita Banna, 22 years old, has Indian parents but was born and raised in Singapore. She has a dual degree in Information Systems and Business Management at Singapore Management University, fluent in three languages: English, Hindi and Telugu. In addition, she works as a model. She is 1.76 m tall, once performed in Louis Vuitton’s Spring Summer show in March 2021, twice appearing in magazines. Vogue Singapore.

At Miss Universe in Israel, Nandita Banna entered the top 16, becoming the first Singaporean beauty to achieve this result in 34 years – since Marion Nicole Teo in 1987. ⁯When she was named by MC Steve Harvey, she said: “I am real I’m grateful to be representing the country in this beauty contest. It’s been more than 30 years since Singapore has reached the semi-finals, so I’m very excited.”