In 1993, a farmer was working in the fields when he came across a strange “pig’s head”, finally uncovering the truth of 24 shocking bloody murder cases.

On April 16, 1993, in a peaceful village in Bao Dinh town in Ha Bac province, farmer woman Trieu Van Yen was excitedly going to work in the fields when she found in her field something strange like a pig’s head.

“Who will behave without virtue, throwing a pig’s head into my field?”shouted Trieu Van Yen.

But when he got closer, he found that the pig’s head was the body of a woman. The gruesome scene made Trieu Van Yen scream and run away.

The woman’s body shook the small village. Everyone believes that disaster has come, bad luck surrounds and destroys crops.

The police immediately approached the scene and carried out an investigation, but there were no footprints or clues around the body.

The woman’s body was covered with little clothing, no suitcases or other documents. The police could not confirm the identity of the victim, only looking at the name printed on Ly Ha Quan’s pocket.

Based on forensic examination, the police identified the victim as a 26-year-old girl, her neck was peeled off, her eyeballs were bleeding, her collarbone was broken, her throat was bleeding, and she died of asphyxiation. Moreover, part of the left palm was also chipped off, proving that the girl had fought fiercely with the killer before she died. The victim’s private area had semen, which the police believe was a case of rape and murder.

The police created an investigation zone and found that there was a re-education camp near the crime scene. Usually perpetrators will not choose this place to commit a crime because it is easily detected by the authorities.

Based on all the clues, the police analyzed the perpetrator as a man between 25 and 40 years old, ruthless with plans, familiar with the topography of the area, maybe people living in this or that village, side by side.

According to police investigations, Thanh Uyen district has 109 people named Ly Ha Quan. Therefore, a search by name of the victim is not a complete course of action.

While the police are in a dilemma, a phone call to report a crime opens a new direction for investigation.

On the evening of August 30, 1993, a truck driver was traveling on a public road in the Thanh Uyen district when he suddenly had a stomach ache. He stopped the car and ran to the field to settle down. At first, he smelled like rotten eggs, but because his stomach hurt too much, he couldn’t pay too much attention.

However, not long after, he found a female body lying in the middle of the field. Because he was so scared, he no longer worried about dealing with the “grief” but ran back to the car to quickly get out of this hellish place. After he calmed down, the driver called the police.

The functional forces felt that these two bodies were related, so they immediately rushed to the scene to find out what happened. Sure enough, the victim was still a girl around 25 years old, both deaths had a death time of 15 days. Therefore, it is highly likely that both girls were raped and killed by the same man.

From the scene of the two cases, it can be seen that the perpetrator was very careful and did not leave any clues regarding him.

However, the police found a small suitcase with children’s belongings and clothes inside. Thus, the victim may be carrying a small child, whose whereabouts is unknown so far, may also have fallen into the hands of the perpetrator.

On the third day since the second body was found, a man named Nhiem Lap Van went to the police because his wife and children were missing. The police immediately suspected that Nhiem was a relative of the victim, so they took him away for identification. Sure enough, the second body was his wife’s.

It is known that Nhiem Lap Van works in the Thanh Uyen district. On August 14, the wife took her daughter to visit her father. However, due to not being able to meet her husband, the wife had to die and her daughter disappeared.

Police conducted an investigation at the Thanh Uyen district train station, where Nhiem’s ​​wife and children met with bad things. The ticket seller recalled that he saw the mother and daughter standing around the station, but then someone took them away.

Police determined that it may have been the perpetrator who seduced his wife and children and then acted violently. Unfortunately, the train station in those years still didn’t have cameras installed, the case seemed to be at a dead end.

Not long after, the police found the third body. Just like that, within half a year, the killer had killed 6 people, all of them young girls. The case shocked an area, making residents afraid to go out at night. Many young women are willing to leave work to stay at home for fear of becoming the next victim.

It wasn’t until a girl named Uong Le panicked and reported to the police that this ongoing case had a clue to changing the situation.

Uong Le said he came to Bao Dinh to earn a living. When he got off the train station, a middle-aged man approached him to talk to him, said that the factory was recruiting and asked him to follow so he could introduce his boss.

Uong Le honestly listened. When the two reached a deserted place, the man suddenly pinned the girl to the ground and played a trick. Uong Le quickly pretended to cooperate, then when he was caught off guard, he fled, eventually reaching the police station to report the case.

According to Uong Le’s description, the killer was a man with single eyelids, bow legs, modestly dressed, honest and simple looking.

Police collect monitoring points at train stations. Uong Le is the only witness who must accompany him to identify the killer.

3. The killer is caught in the net

A policewoman disguises herself as a girl who just got off the train to attract the killer’s attention. However, for several days in a row, there was no result.

In October 1993, the killer killed a total of 9 people, all of whom were girls lying dead in the fields. Thus, it can be seen that, even though the media reported on the killing widely, the perpetrator was not afraid but continued to take action.

It was only on November 3, thanks to the identification that Uong Le provided, that the police targeted a suspect. Therefore, the staff found a man wearing women’s pants, his eyes wandering in all directions, acting suspiciously.

When the authorities approached to question him, he was shocked and wanted to run. The police arrested and investigated, only to find out that this man worked as a shoe repairman at the train station. In his pocket was a power cord. This detail made the police suspicious and took him to the station.

Through DNA tests, the police concluded that the shoemaker was the culprit in the series of cases.

Ngo Kien Than knelt down to confess all crimes, shaking to say he still had a baby girl at home, hoping the court would be lenient in handling him. Fortunately, the baby was Mr. Nhiem Lap Van’s little daughter.

According to investigative information, Ngo Kien Than did not receive a proper education, his psychology was abnormal, he liked to peek at women who were taking a bath when his father beat him to death. When he grew up, he played rape, so he had to go. years in prison and just got out of prison.

Further investigation, the police learned that since 1990, Ngo Kien Than was used to the old way, seducing the daughter of a good family, then raping, then killing people to break his mouth. The police made a case in 1990 but could not catch the culprit.

Since then, Ngo Kien Than has grown bolder and ruthlessly murdered 24 young girls in 1993.

Who would have thought, from a “pig’s head” in the field, an ongoing tragedy that claimed more than 24 human lives was revealed. In 1994, Ngo Kien Than was sentenced to death by a court, but death still cannot atone for the crimes he has committed.

Student Huong Giang is proud to be called a “moral gentleman” 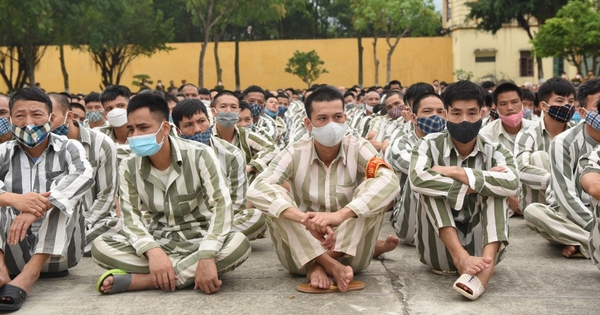