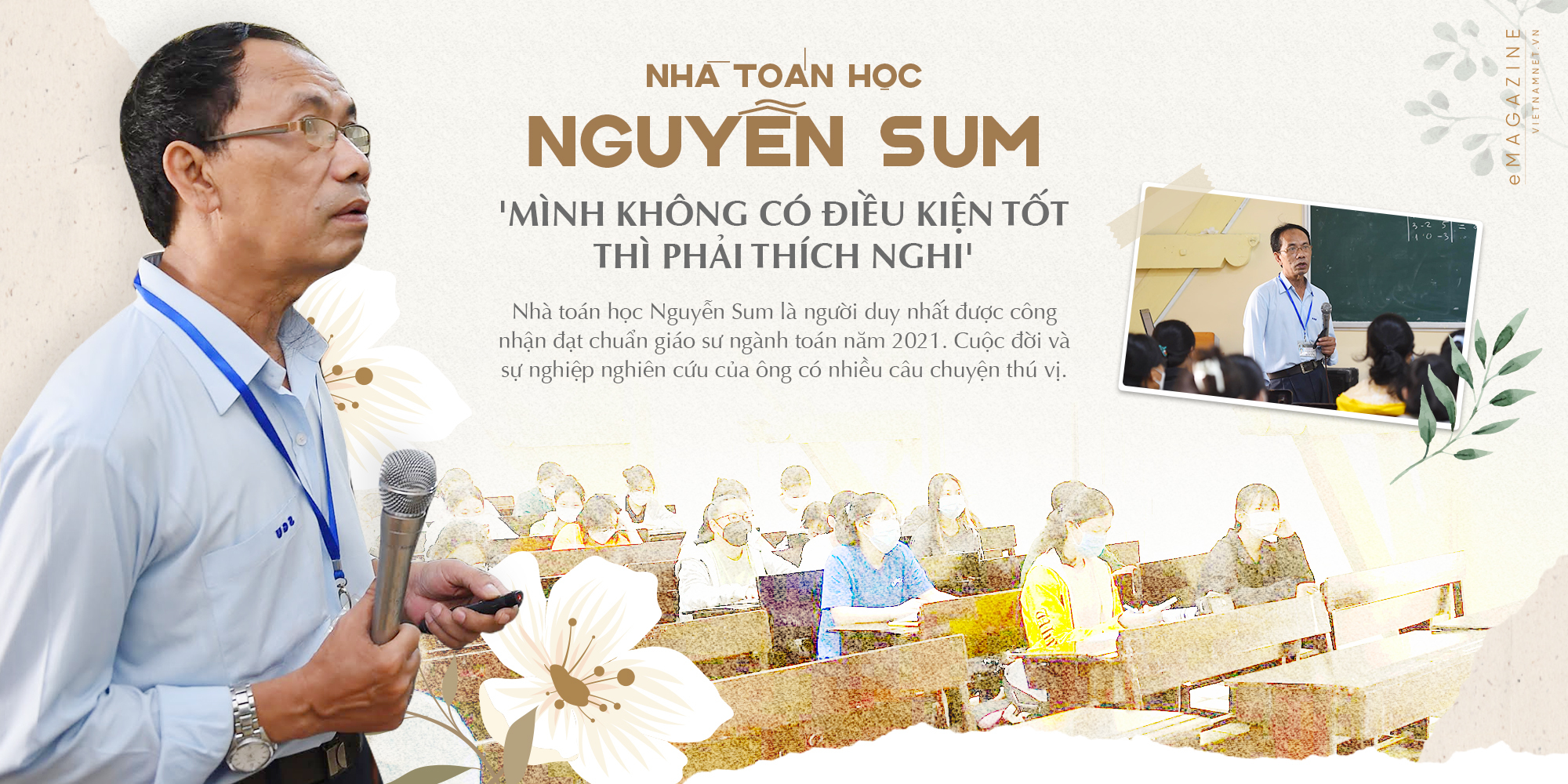 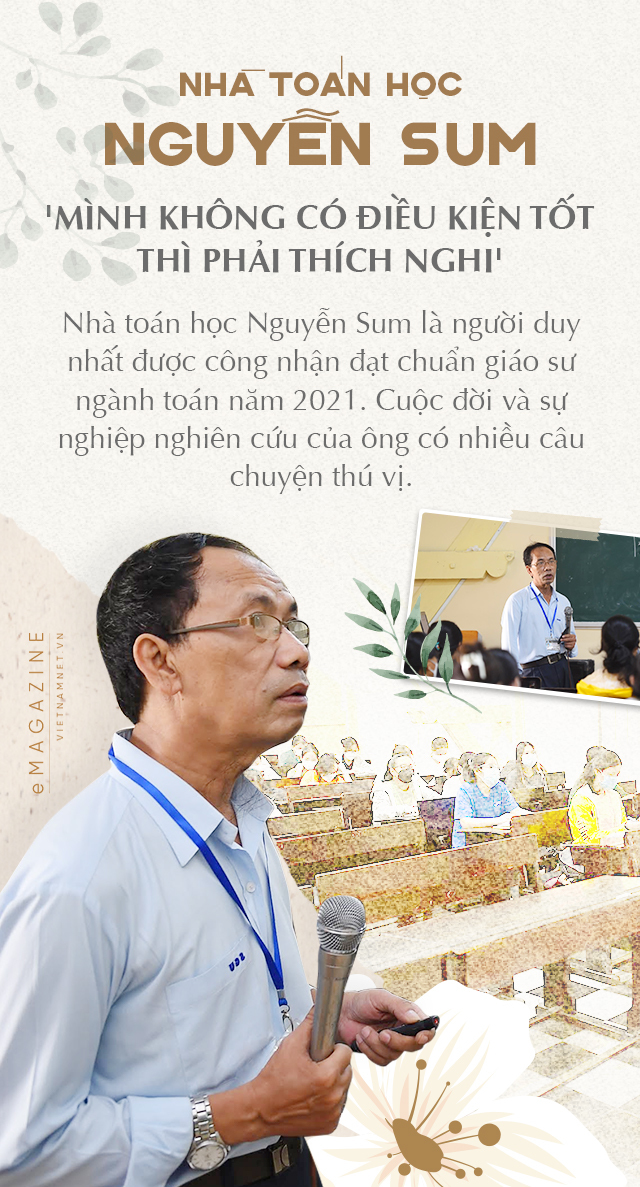 Born in 1961 in Phu Cat, Binh Dinh, mathematician Nguyen Sum has spent more than half of his life attached to his homeland and Quy Nhon University.

Associate Professor Nguyen Sum said that he was born and raised in an area where war happened frequently (before 1975), so his studies were often interrupted because his family had to evacuate many times. In the course of studying, there were many years of not being able to fully study the program, so self-study and self-discovery were formed in him from an early age. His hobby of doing Math was also formed naturally in the learning process, everything is completely self-reliant, all knowledge is only accumulated from studying at school and self-study, no extra lessons and no anyone’s support.

In 1979, he was selected to join the team of Nghia Binh province (Quang Ngai and Binh Dinh) to participate in the first national math competition held in the country. He admitted that his results in the exam were not high, but the passion of a district school boy for Mathematics started from there. 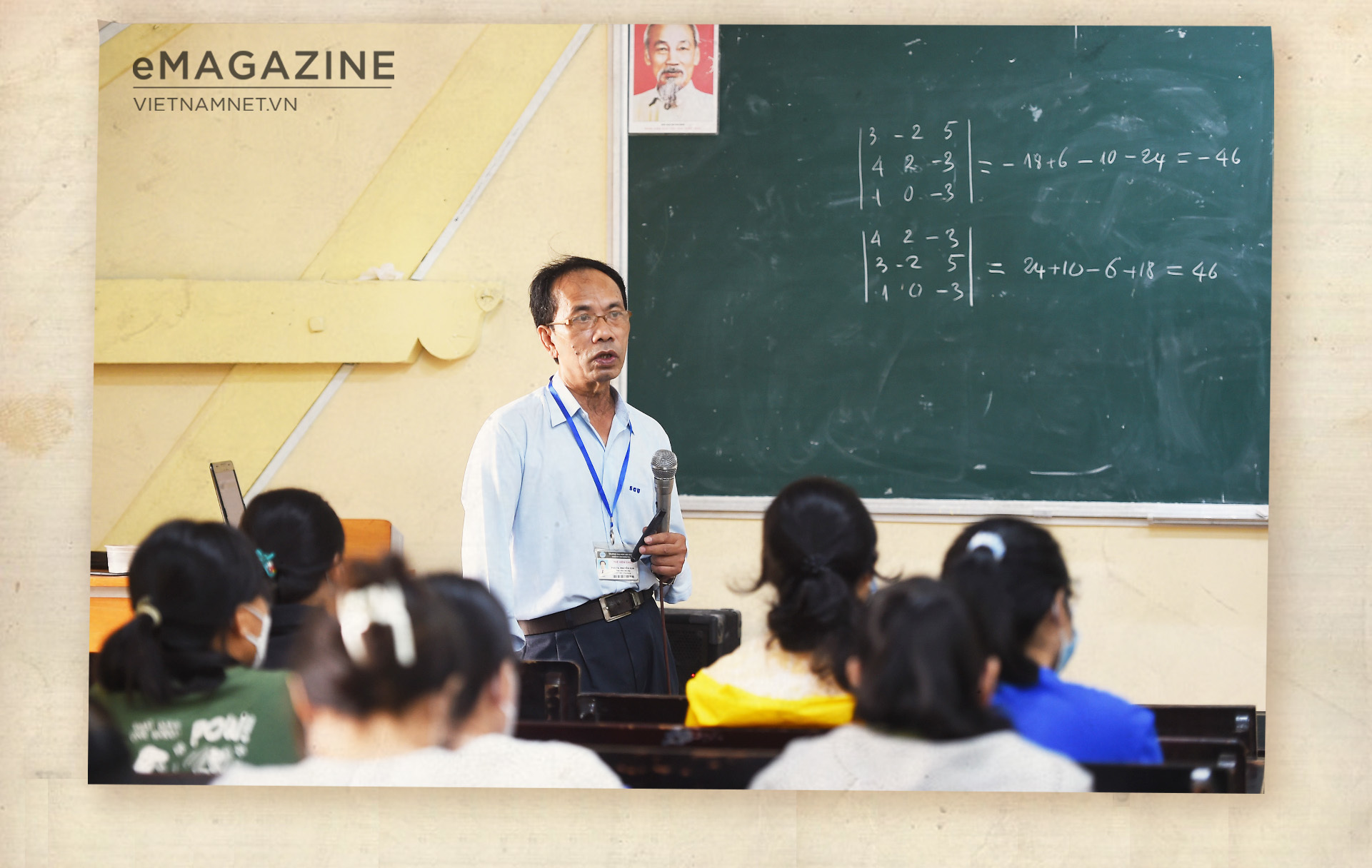 In September 1979, he chose to enter the Mathematics Pedagogy major of Quy Nhon University. At this place, before focusing on teaching and research, Assoc. Nguyen Sum had a long time working as a manager in many different positions. He experienced the positions of Dean of Mathematics Department, Head of Training Department, and Vice Rector of Quy Nhon University. After that, he was persuaded by the Ministry of Education and Training to be the principal of this school but refused.

“Honestly, I have refused to accept the management task since 2004 when I was nominated for the position of Vice President, but I could not refuse”- Assoc.

As for Assoc. Nguyen Sum himself, this is like common sense.

Sharing about the reason for not being a university president, Assoc. school. Moreover, his health at that time also did not allow him to continue working, and wanted to spend all his remaining time teaching and doing scientific research, so he asked not to continue working as a manager.

“Rejection is a right decision of my life, so there is nothing to regret.”

Although attached to a local university, Assoc. Nguyen Sum received the Certificate of Creative Labor from the Vietnam General Confederation of Labor in 1997; Prize for Mathematical Works in 2013, 2015 and 2016; Ta Quang Buu Award 2017 for the work “On Peterson’s hit problem” in Advances in Mathematics magazine – one of the world’s leading journals in mathematics (On the Peterson hit problem, dvances in Mathematics, Vol. 274) , 432–489).

This is a scientific work that is considered to be particularly excellent in the field of algebraic topology, solving a special case (k = 4) of the “hit” hypothesis proposed by the American mathematician Frank Peterson released 30 years ago. This work is considered a new step in solving the Peterson hypothesis since 1990, carried out entirely in the country by a single author, Assoc. 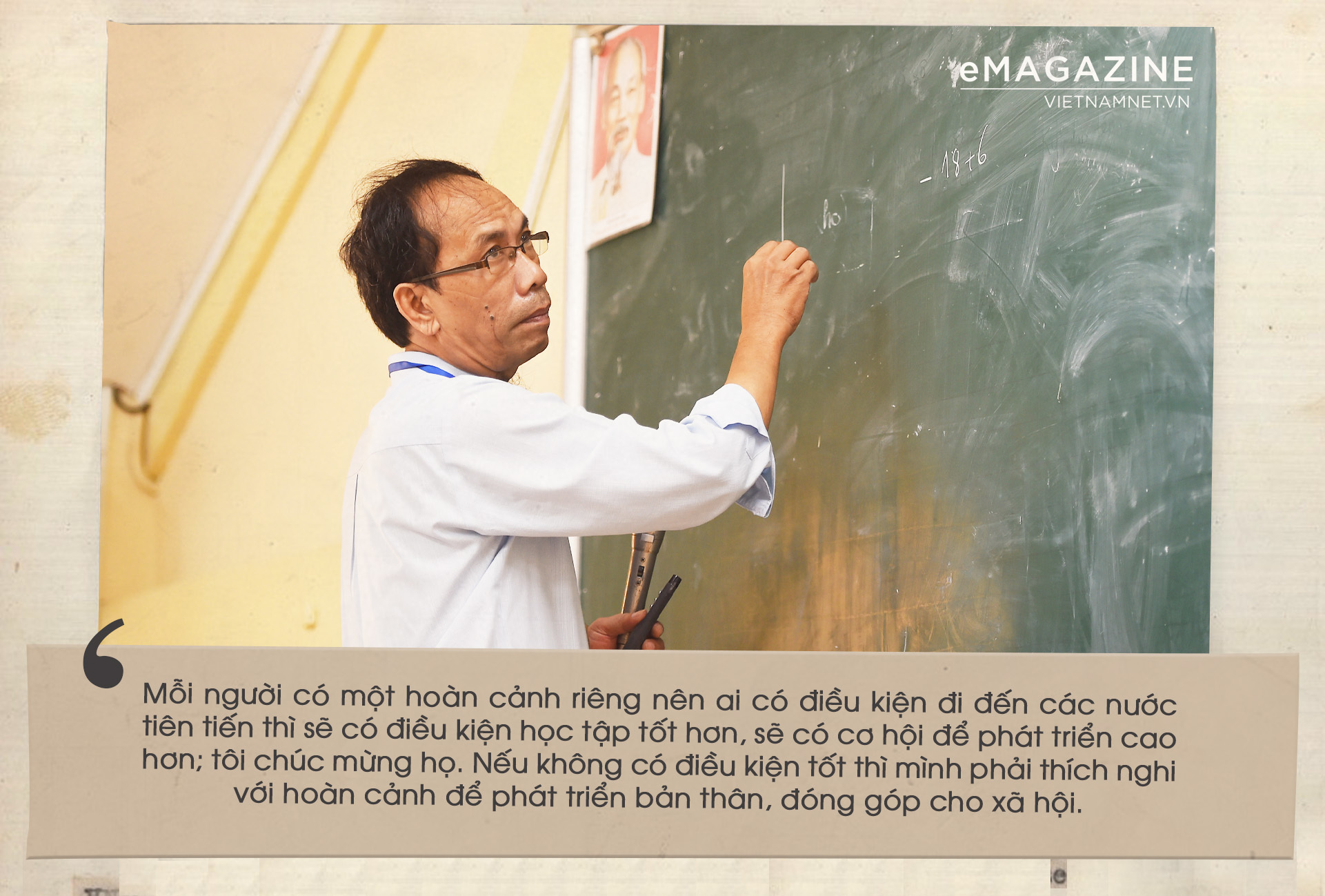 From the work “On Peterson’s hit problem” until now, what have you done?

Mathematician Nguyen Sum: Previously, I worked on this problem relatively independently, but from 2018 until now, two more students have worked quite actively and published many results on this problem in prestigious international journals.

Regarding my personal work, recently, in addition to the published results, I have had quite a large result in the progress of solving Peterson’s hit problem. This result is written as a summary in a more than 30-page paper published on the website of VIASM (Institute for Advanced Study in Mathematics) at the end of 2019, but the time has not been arranged to complete because of the work. Teaching in the last two years takes up a lot of time. The detailed version of this paper can be hundreds of pages long, so it takes a long time to complete and publish.

Although not officially published, these results are a new step in the process of solving the problem and have attracted the attention of leading experts in this field.

Many of our math professors have been or have been abroad to facilitate research. However, he did not follow this path but became attached to a local university by blood, have you ever thought about this?

Mathematician Nguyen Sum: Personally, the community appreciates the independence and self-reliance in the country, but cannot compare with some of these GS.

I had some opportunities to study abroad, but because of social conditions at that time, I could not complete the procedures to go to school. However, I never regretted it. Each person has a unique situation, so whoever has the opportunity to go to advanced countries will have better study conditions, will have the opportunity to develop higher, I congratulate them. If we don’t have good conditions, we have to adapt to the situation to develop ourselves and contribute to society.

Although I work in the country, I was fortunate to have early access to a modern research direction that is timely on a par with international standards (I soon got to work with Prof. Huynh Mui, who transferred from the University of Tokyo, Japan, returned to work after 1975), so if I try and be determined with the guidance of the teacher, I will succeed.

Although there are many difficulties in going abroad, I strongly support and create all favorable conditions for the young generation to study abroad when I work as a manager at Quy Nhon University.

It is known that he left Quy Nhon University to go to Saigon University? At the age on the other side of the slope of career and life, you are working at a brand new university, is there any difficulty for you?

Mathematician Nguyen Sum: I work at Quy Nhon University but my family has been in HCMC since 2011. In 2018, both of my children received scholarships to study abroad, so I moved to HCMC. because it is convenient for the children when they return to visit their families.

When I was planning to go to HCMC, some friends advised me to go to one of the big schools, but at the Faculty of Applied Mathematics, Saigon University, there was someone in the same field of expertise as me (Prog. Phan Hoang Chon), can exchange and cooperate in expertise. Moreover, according to my understanding, Saigon University has good policies to support people who work in scientific research, the Faculty of Mathematics – Applied Science has a team of young lecturers with good research ability. and growing strong. So I chose Saigon University to move to.

Coming to work at a new school, the only difficulty I had was that I had to teach new subjects, so the first year was a bit difficult to spend time preparing lessons, unable to arrange time for scientific research. . However, the School and Faculty also created favorable working conditions, so difficulties only occurred in a short time.

Your son also has a doctorate in mathematics, how did you teach him the first math problems?

Mathematician Nguyen Sum: My son also does Mathematics but in a different major from me (my son works on “Control and Optimization” and I work on “Algebraic Topology”), currently working at a postdoc position in France.

During the learning process of my children, I only guide them to self-study, not take extra classes. In terms of main expertise, they choose and follow what they consider themselves capable and like, not imposed by their parents. The knowledge the children have learned from teachers at school and self-study, I only support when needed, not actively teach or pose any problems. 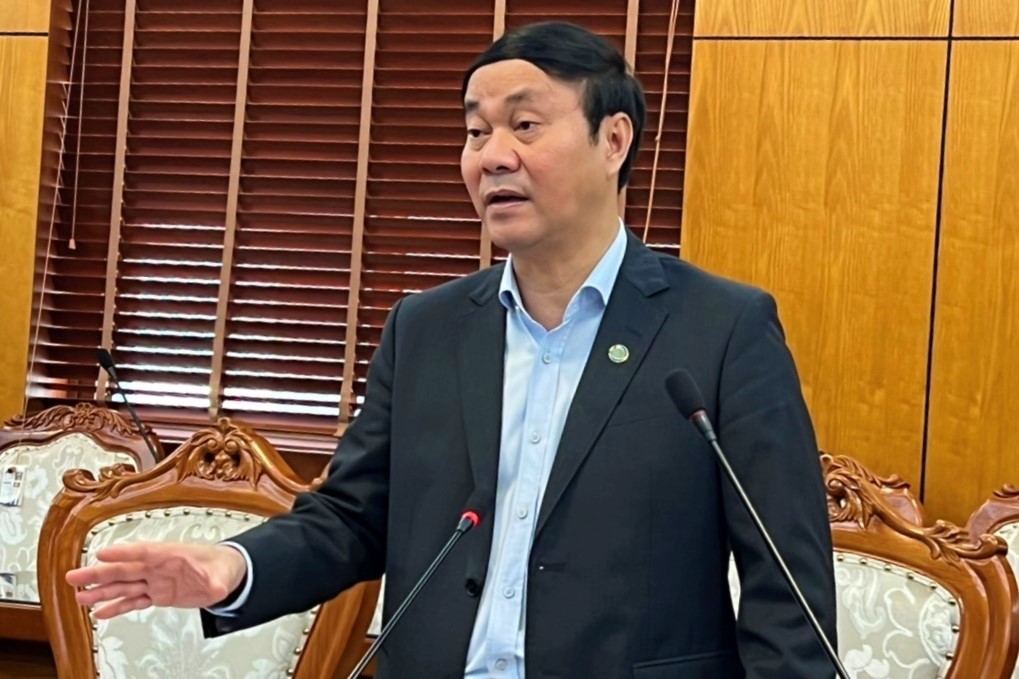 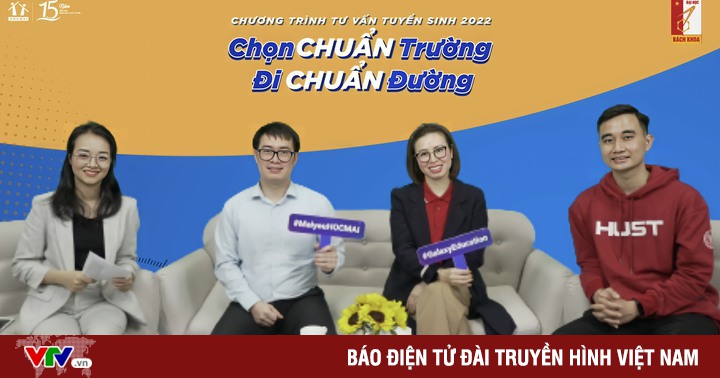 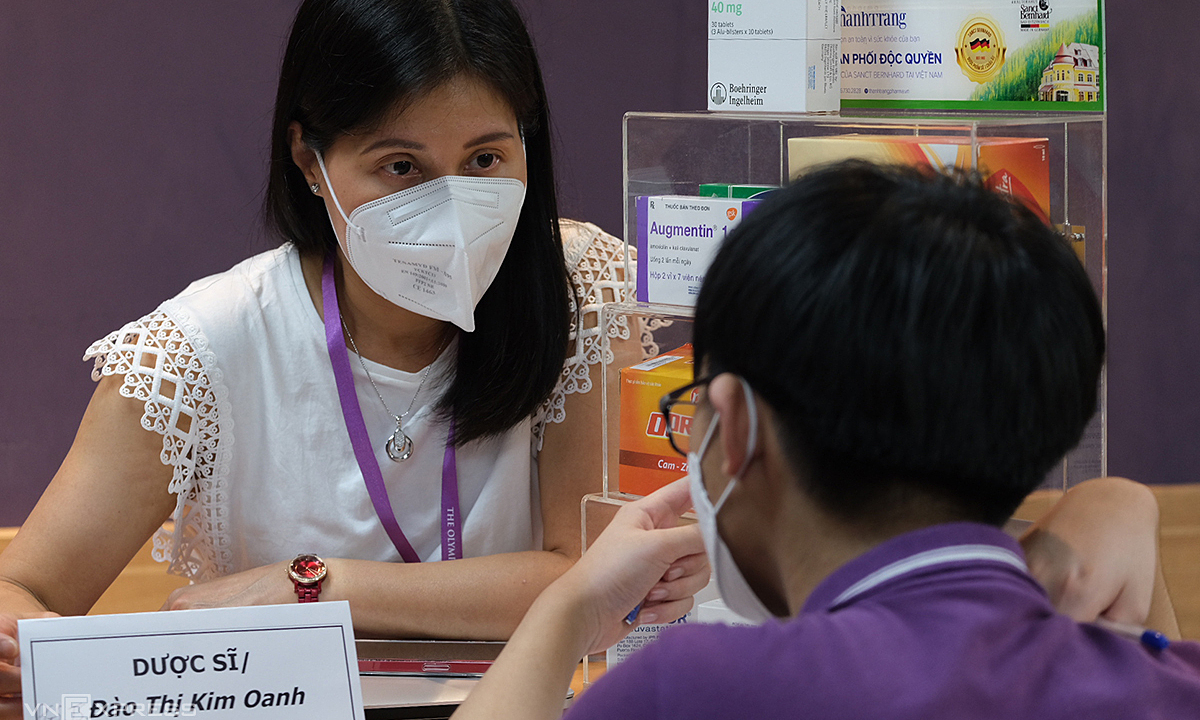 Parents play the role of career guidance experts for students