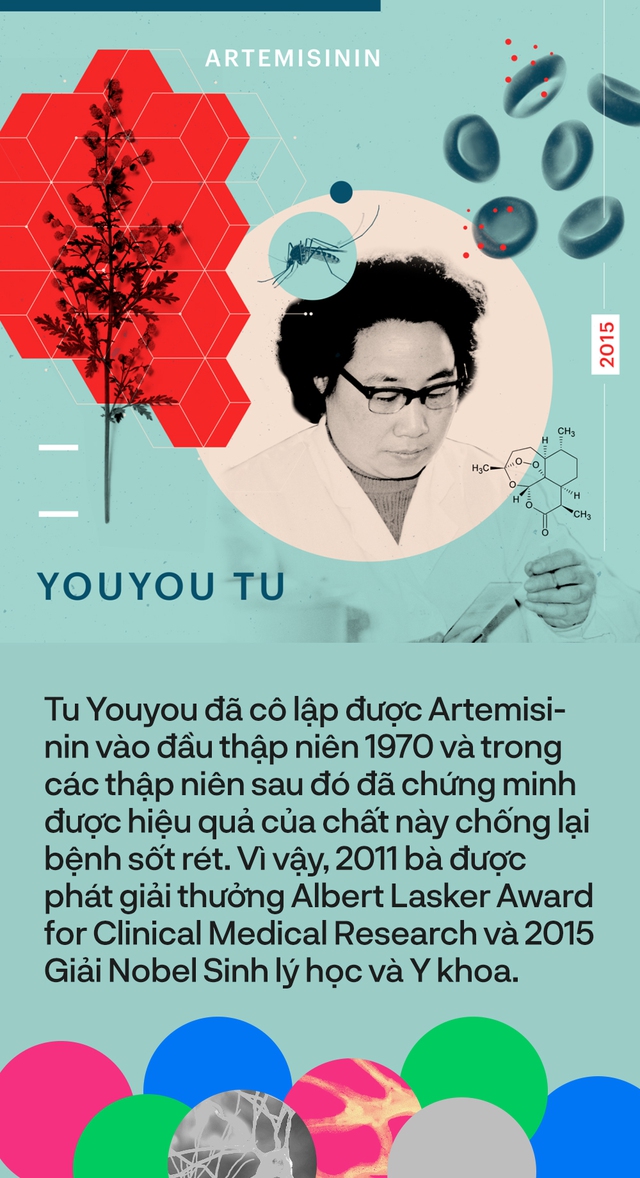 In many respects, Tu Youyou (Vietnamese name is Do UU) is an “unusual” scientist. Unlike many researchers, she did not earn a formal doctorate during her studies, nor did she study abroad, but she has saved millions of lives with the results of her research.

She and her team found inspiration in traditional Chinese medicine books, combined them with ancient Chinese herbal formulas, and then extracted the active ingredient in a non-crystal form. color, called artemisinin. From a popular Chinese herbal medicine called Qinghao – Qinghao. This compound turns out to be a powerful anti-malarial drug. Accordingly, Tu Youyou won the 2015 Nobel Prize in Physiology or Medicine. 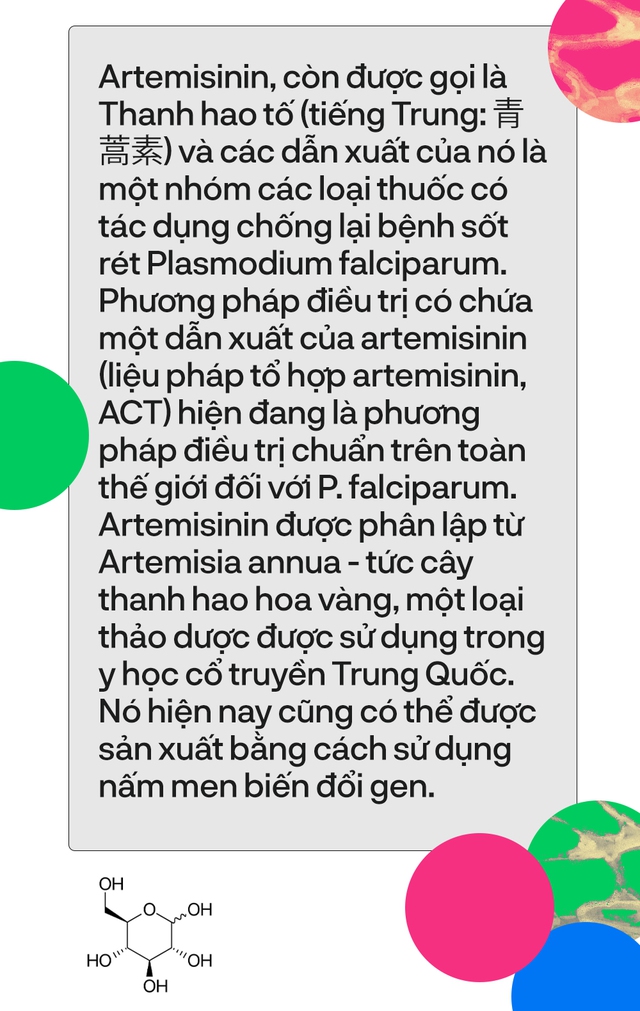 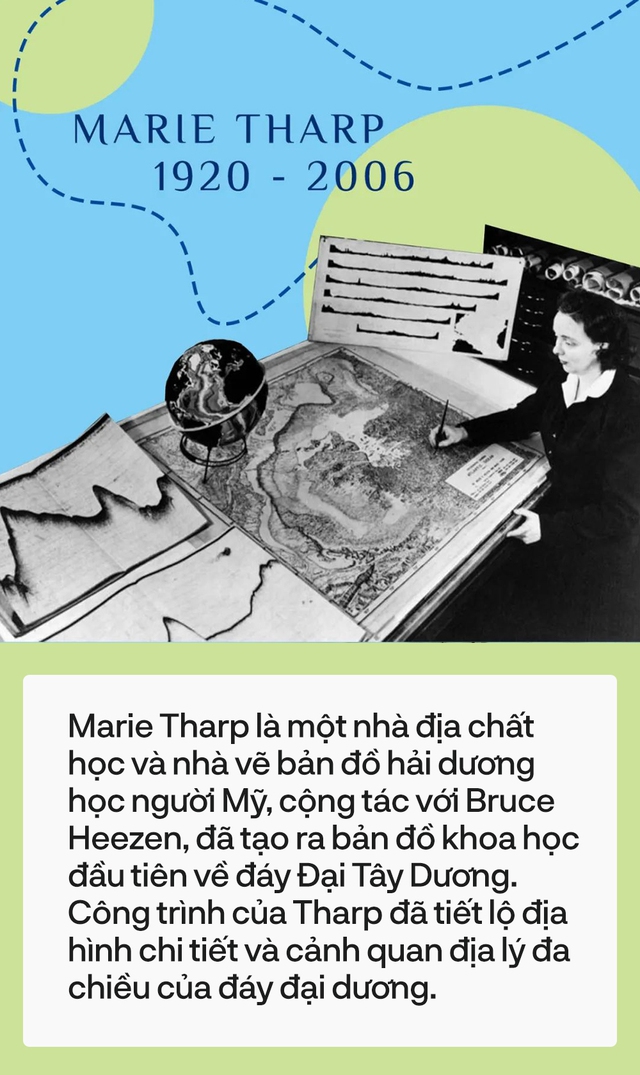 Our understanding of the Earth in modern times stems from the bold speculation of a group of geologists like Alfred Wegener, namely the theory of plate tectonics. But the process of making this theory widely accepted has been a rough one, and an important step in this process comes from our knowledge of the seabed.

It was not until the 1950s, with the help of sonar technology, that Marie Tharp (1920–2006) began to draw and publish the first topographic maps of the ocean floor, allowing humans for the first time to truly “see” the ocean floor. In particular, the cross-sectional map she drew across the North Atlantic revealed a large crack in the center of the ocean floor, and by comparing the epicenters of earthquakes, she and her colleagues found found that the epicenters of the earthquakes were located inside the cracks, suggesting that the motion did indeed cause the continents to drift.

Although Rosalind Franklin (1920-1958) never received a Nobel Prize, her name is forever associated with DNA and the understanding of DNA by science today. In 1952, Franklin and doctoral student Raymond Gosling captured an X-ray diffraction image of DNA, and named it “Photo 51”. This image then became famous in the scientific community and became the key to unraveling the double helix structure of DNA.

However, Franklin’s contributions to science went far beyond that. She used X-ray crystallography to demonstrate the detailed structure of the tobacco mosaic virus, laying the groundwork for polio virus research. Although her life was short, she left many treasures for future generations. As the words are written on her gravestone, “Her research and discoveries about the virus have brought lasting benefit to mankind”. 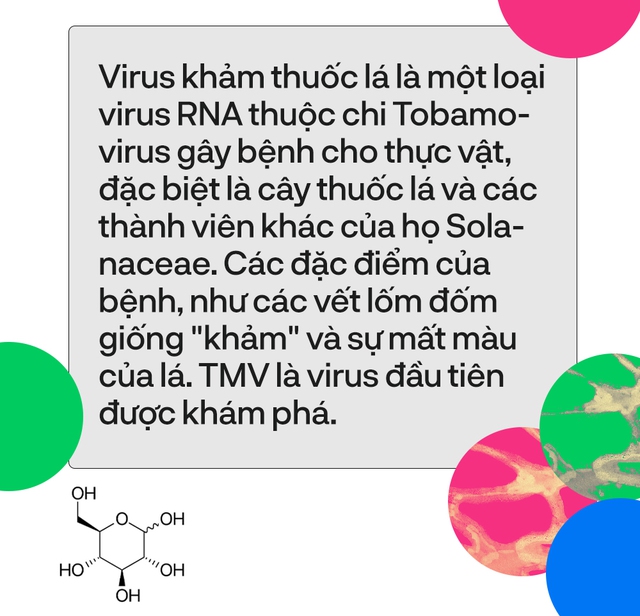 Wu Jianxiong – Ngo Kien Hung (1912 – 1997), she was honored as the queen of physics. After studying abroad, receiving a doctorate, she decided to stay in the US and become a famous Chinese-American physicist.

In 1956, when Duong Chan Ninh and Ly Chinh Dao first put forward the “law of non-preservation of even and oddness”, it shook a rule that until then was considered a golden rule that is “event-odd conservation law”.

Their study of the experimental results of the time convinced them that parity was preserved for the electromagnetic and strong interactions. For this reason, scientists had expected the same to be true for the weak interaction, but it has not been tested, and theoretical studies by Yang Zhenning and Li Zhengdao suggest that may not be the case. true for weak interactions.

To prove the correctness of the theory of these two scientists, Ngo Kien Hung did a lot of research, almost all day in the laboratory; sleep for only four hours a day. After that, she achieved a remarkable result: Proving that the Yang-Li law is correct, it shocked the world of physics. Some say Ngo Kien Hung is the one who freed atomic physics and nuclear physics from the first barrier.

Ngo Kien Hung has conducted many experiments of great significance for atomic and quantum mechanical spectroscopy, so he has won many special honors. In 1974, she was voted by American scientists as “the best scientist of the year”, the first female scientist to receive that honor. In 1975, Ngo Kien Hung was elected by American physicists to be president of the American Physical Society. 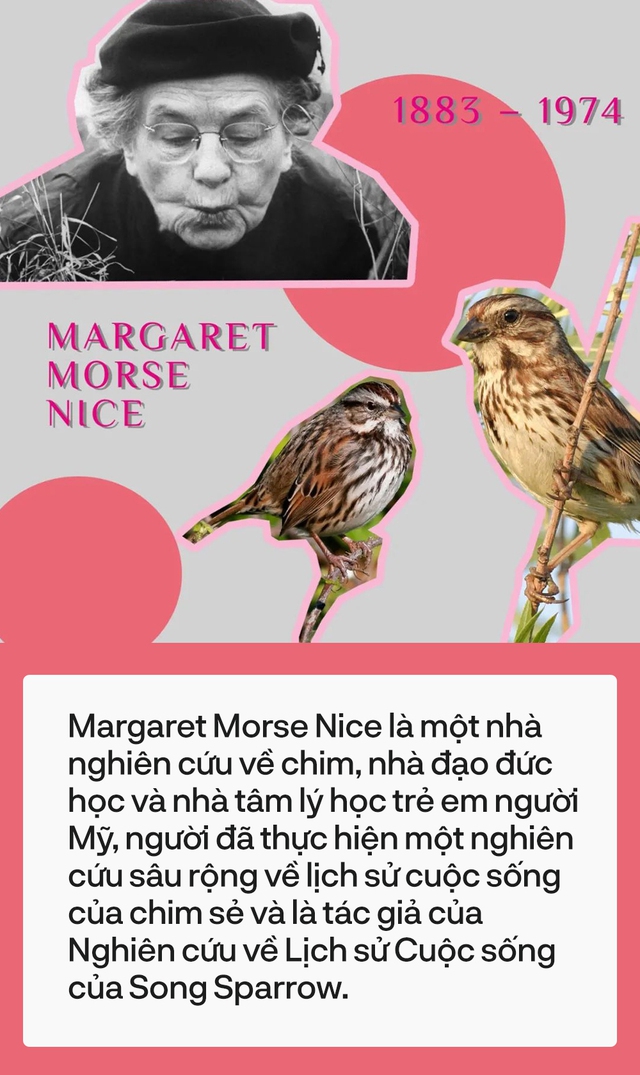 Although in some respects we cannot see the world exactly like animals, scientists have been trying for years to understand the world as much as possible through the eyes of animals, leading to a deeper understanding of nature. This is inseparable from nuanced observations of animal behavior and the reasoning behind it, the field also known as Ethology. One of the pioneering scientists in this field was Margaret Morse Nice (1883 – 1974).

From the early 1900s to the 1960s, she studied animal behavior for more than half a century, especially conducting extensive and meticulous fieldwork of North American finches to uncover the territoriality of birds as well as the meaning behind it. What is more interesting is that after becoming a mother, Nice also published many research papers on linguistics by observing her children’s language development. Her life was, as the title of her autobiography describes it, “Research was a passion for me”.

When Albert Einstein wrote his obituary for Emmy Noether (1882 – 1935) in 1935, he called Noether an “extremely creative mathematical genius”. Since Noether’s theorem was published in 1918, it has remained one of the most important theorems of physics for more than a century. This theorem links conservation laws with natural symmetries, showing that every symmetry corresponds to a conservation law of association and vice versa. It not only solves a dilemma in general relativity, but it also provides physicists with a unified view of the universe.

In the second half of the 20th century, Noether’s theorem also underpinned the Standard Model of particle physics. It is therefore also hailed by some physicists as “the guiding light of physics in the 20th and 21st centuries”. In addition, she has made outstanding contributions to the field of mathematics, she pioneered the field of abstract algebra, her name also appears in many mathematical concepts. 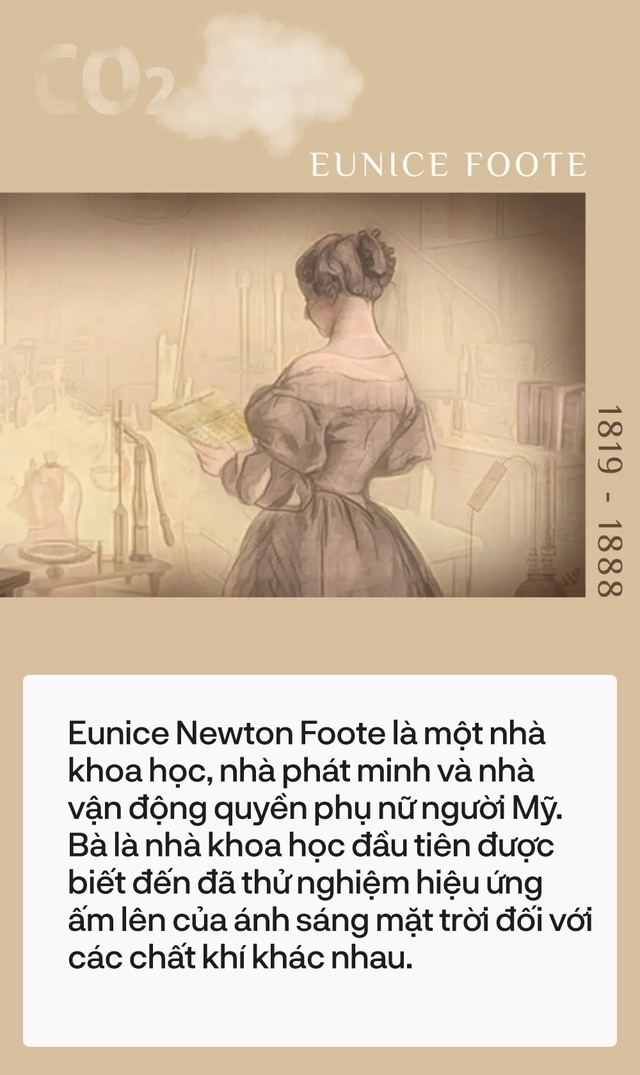 We now have a fairly extensive understanding of the amazing ability of carbon dioxide to retain heat in the atmosphere, and that it is also a major cause of global warming. This property of carbon dioxide was discovered as early as the mid-19th century.

At that time, Eunice Foote (1819 – 1888) conducted a simple experiment. She placed one thermometer in two glass cylinders, filled one with carbon dioxide and the other filled with air, and left them in the sun. In the end, the cylinder containing the carbon dioxide showed that it was much warmer than the other tube. Foote realized that carbon dioxide in the atmosphere absorbs a lot of heat. Therefore, she proposed that “If the air were mixed with a higher proportion of carbon dioxide, it would cause the temperature of the atmosphere to rise and a higher temperature atmosphere would give our Earth.” I’m hotter.”

Foote’s article was published in 1856 under her name in the American Journal of Arts and Sciences, shortly after that of her husband, Elisha. However, for some reason it was not included in their annual publication of the association’s meetings by the American Association for the Advancement of Science (AAAS).

Foote’s work has shown that the heating effect of sunlight is influenced by carbon dioxide and water vapor in the atmosphere. This could be the first scientific study to prove the existence of greenhouse gases.

The daughter of poet Byron, Ada Lovelace (1815-1852) did not really have much to do with her father, instead living with her mother. Potty received a good private education at the time, especially learning a lot about science and math, which was rare at the time.

As a child, Lovelace showed incredible talent, and as a teenager, she and Charles Babbage began researching “analytics”, often referred to as the forerunners of computers. What’s even more special is that Lovelace focuses on the potential of data more than anyone else and enhances the ability of machines to handle more tasks, such as using machines to create musical compositions. . At the same time, she also developed an algorithm to calculate Bernoulli’s number.

Disgusted with birthday parties but still "organized" by the boss, the male employee bitterly filed a lawsuit to arrest the boss for 10 billion, fans can only clam up 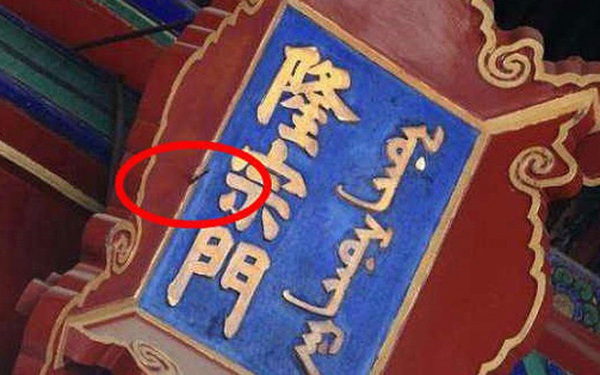 On the mark of the Forbidden City, there is a mysterious black arrow stuck for more than 200 years that no one dares to spit it out, the story behind it is very thrilling. 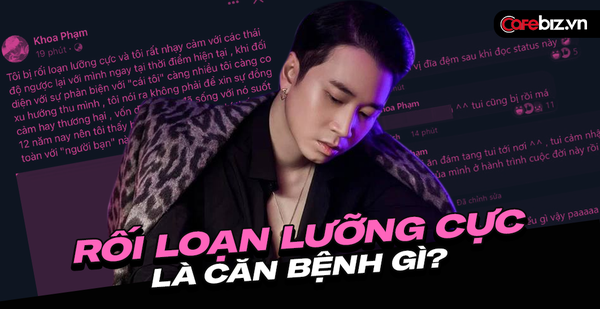 In the middle of the night, post a status announcing that you have bipolar disorder, telling you to “get ready to eat my funeral”, how does Karik have a dangerous disease? 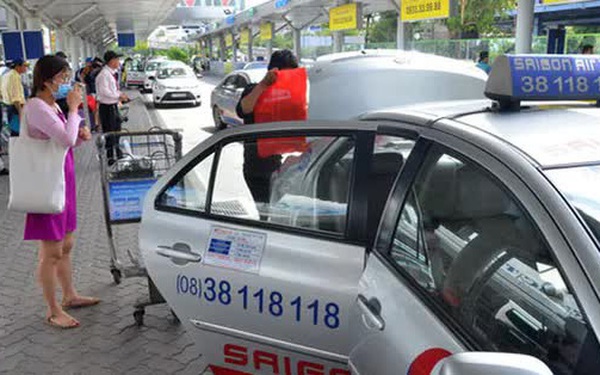 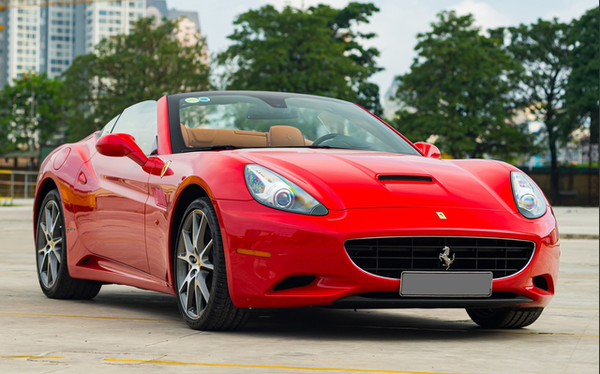