Up to now, most banks have announced their business targets for 2022. Accordingly, 25/27 banks listed and traded on UpCoM plan to grow their profits in 2022.

In general, the 27 banks mentioned above, the total profit before tax in 2022 is expected to reach at least more than 245,024 billion VND, up 34% compared to the implementation level in 2021.

In which, Vietcombank is the bank with the highest planned profit in the system when it is expected that the consolidated profit will increase by at least 12%, equivalent to nearly VND 30,700 billion. If the plan is completed, Vietcombank will be the first bank in Vietnam with a profit of over 30,000 billion.

At the end of the first quarter, Vietcombank recorded a consolidated pre-tax profit of VND 9,950 billion, up 15.3% over the same period and fulfilled 1/3 of the minimum profit plan.

Following Vietcombank is VPBank’s pre-tax profit target more than double the previous year with 29,662 billion dong, up 103% compared to 2021. In the first quarter, this bank recorded a record profit of 11,146 billion dong, nearly 2 times ,8 times the same period in 2021 and completed nearly 38% of the full year profit plan.

In addition to the names mentioned above, there are 4 other banks that also expect a consolidated profit of over 20,000 billion in 2022, which are VietinBank (21 trillion billion), BIDV (20,600 billion) and MB (20,300 billion). By the end of the first quarter, besides VietinBank, whose profit decreased by 28%, BIDV and MB both grew strongly with pre-tax profits of 4,513 billion and 5,909 billion respectively. 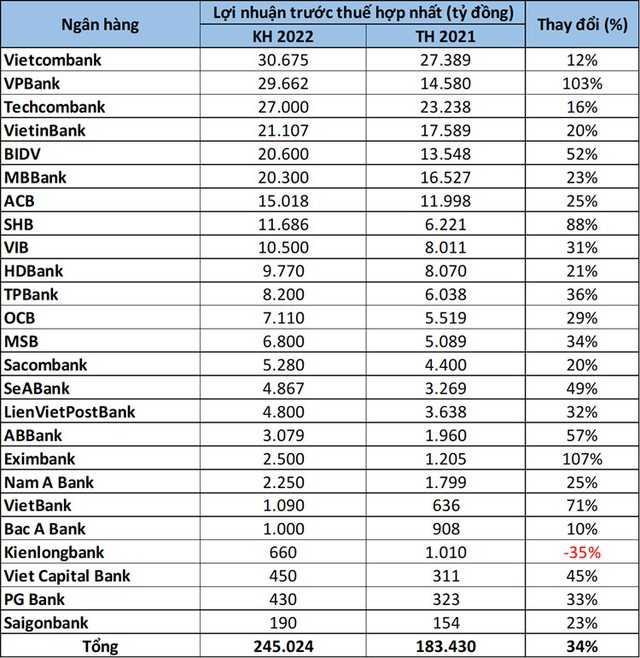 In terms of growth rate, Eximbank is the most ambitious bank when submitting to shareholders a profit plan of VND2,500 billion, up 107% compared to the implementation level in 2021. However, this plan has not been approved because the bank has not yet approved. failed to hold the 2022 Annual General Meeting of Shareholders.

According to VPBank’s management, in 2022, the banking industry is expected to continue to see positive growth. Credit demand recovers and strong growth is the raw material for the recovery of economic growth. The State Bank of Vietnam has set a target of 14% credit growth for the whole industry, focusing on credit in manufacturing and priority areas according to the Government’s policy. Interest rates will be kept at a stable level to support economic development.

VPBank’s management said that with a solid foundation, the bank is confident in achieving the set goals. Specifically, this year VPBank will maintain a high credit growth momentum at the parent bank, at 35% (if allowed by the State Bank and depending on market developments). According to the bank’s leaders, this growth rate has been calculated based on the needs and capacity of the bank, the actual figures will be based on the maximum limits set by the State Bank.

“In the first quarter, the bank had unusual revenue from cooperation with insurance partners, but even after these amounts are deducted, business results were still achieved based on the built foundation. There is a lot of pressure on the bank’s leadership, but we have a specific strategy, clearly orienting the growth drivers and are confident in the plan,” said VPBank CEO Nguyen Duc Vinh.

Sharing with shareholders at the last meeting, Vietcombank Chairman Pham Quang Dung also fully believes that the bank will fulfill its profit target for the whole year, maintain the goal of an effective and best-quality credit institution. like the past years.

Talking about the profit target of 87% increase, SHB Vice President Vo Duc Tien said that this figure is completely reasonable because last year the bank had sharply increased provision for risks to complete the settlement of bad debts of VAMC. Therefore, the burden of provisioning this year will decrease sharply by about 3,000 billion compared to last year, which is the basis for the bank to increase profit sharply.

With the results of the first quarter, the General Director of ACB said that he is very optimistic and can exceed the profit growth target of 25% in 2022. In addition, if the economic situation is positive, ACB will reverse the provision and have an extraordinary income this year.

At MSB, General Director Nguyen Hoang Linh said that although he did not record sudden revenues such as Upfront insurance fees like last year, the profit in 2022 will still grow well. In fact, this year, the bank set a profit before tax target of 6,800 billion VND, up 34% compared to the previous year. That means Core Business (core business activities) will grow very strongly.

According to Mr. Linh, MSB has continuously grown credit at a high rate thanks to relatively good risk management. At the same time, the bank did not focus on lending to risky areas such as securities and real estate (only 9.8% of total outstanding loans). In addition, MSB also participates in many policies, together with the State Bank to support and remove some cases. On that basis, the SBV also gave a good assessment to MSB and gave the bank a high credit growth rate in the coming time.

Do you know why the iPhone has this mysterious dash?-Hi-tech fashion 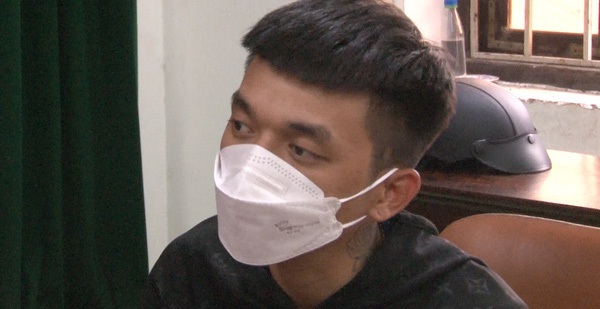 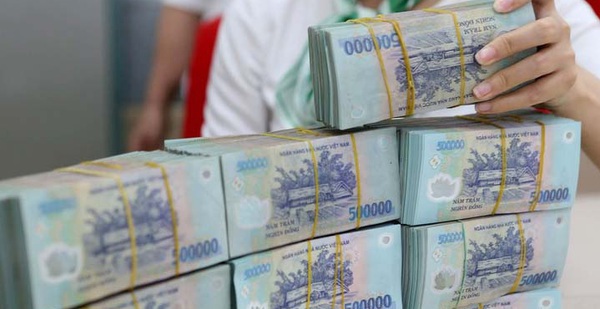 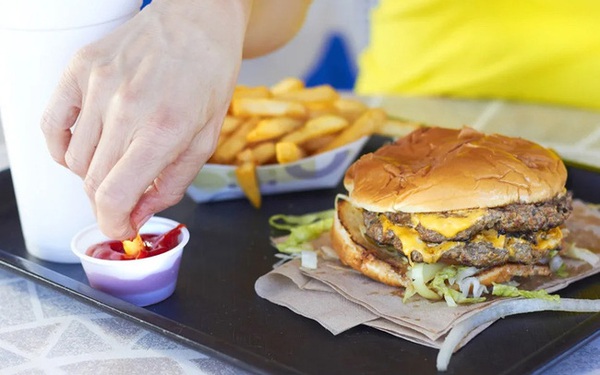 After the age of 30, women need to avoid the following 6 eating habits to keep bones and joints healthy, avoid the risk of diabetes, office workers cannot ignore 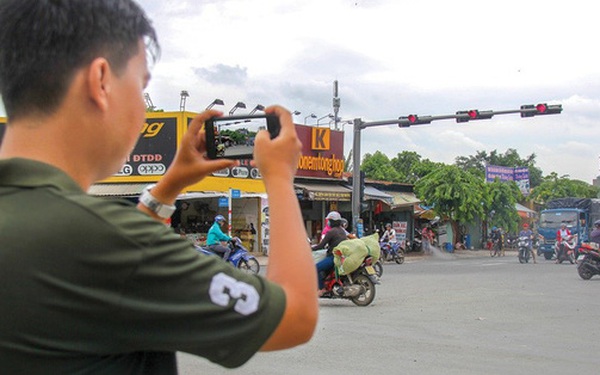