The beautiful love story of the “golden couples” in the football village is always a topic that receives great attention from fans. Because, in addition to impressive achievements and handsome looks, the sweet affection of the players also makes many people admire and wish.

The secret love story for many years, suddenly brought the fangirl to the palace of Cong Phuong and Vien Minh

In addition to being a good “scorer” of the national team, Cong Phuong also impresses everyone with his full and discreet married life. His wife, Vien Minh, has a “background” as terrible as her husband when she studied at RMIT University, is the daughter of the family.

The couple unexpectedly got married in 2020, although the player had never revealed anything before. However, the more people learn, the more people admire the couple’s love. According to many sources, Cong Phuong knew Vien Minh during a training trip with U19 Vietnam in Belgium. The couple is said to have started dating in 2016. In all his activities, there is the presence of his wife, although the two do not post anything about each other on social networks. 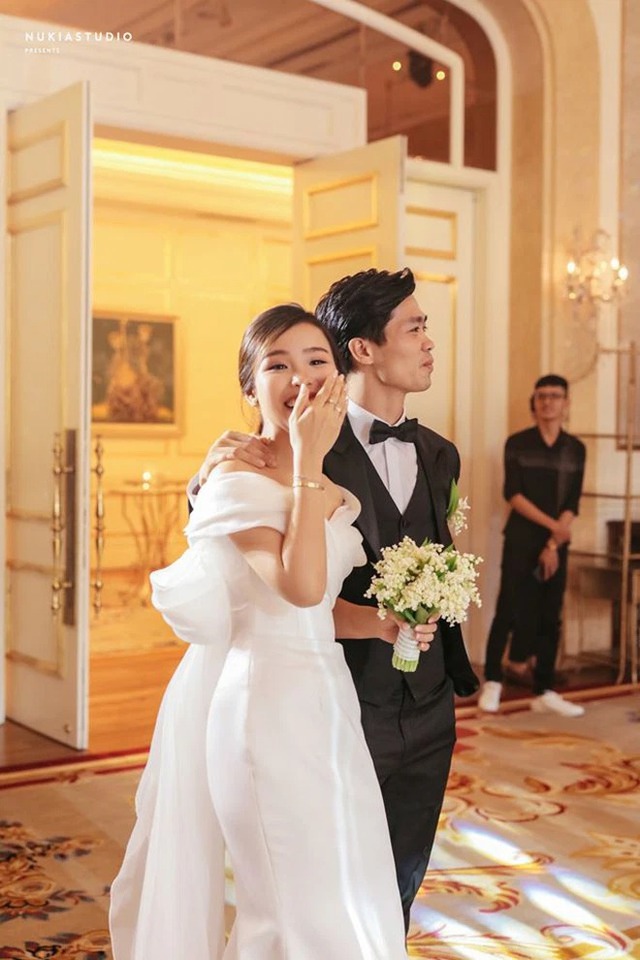 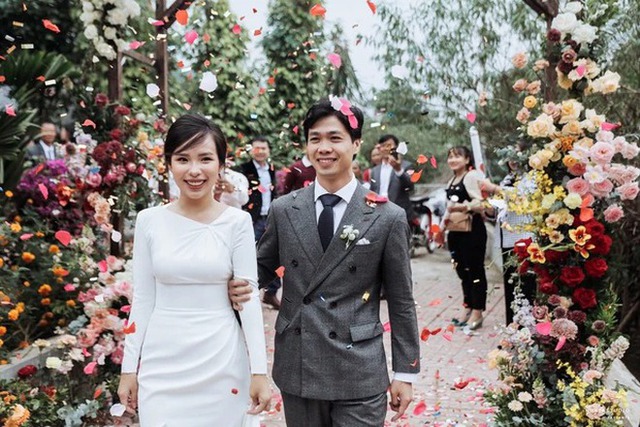 A special, rare thing in the world of players is that Vien Minh is not only a solid rear but also the most successful fangirl of her husband. She used to play a pivotal role in Cong Phuong’s fan club. All activities are arranged and organized by Vien Minh. “Happy ending” is like a drama when the bride holds hands with her fan who is also the person she loves the most at the ceremony. Also on the big day, the groom also said a sentence that made many people cry. “I want to thank you. In the past time, many difficulties have come to me. You also have a lot of pressure. I really appreciate that. And I will do everything to make us happy.” .

Perhaps, a Cong Phuong who doesn’t like noise and attention has found the right person, a fangirl who loves him wholeheartedly, silently without calculation. After getting married, the two also had a beautiful baby boy. Although she doesn’t appear much, Cong Phuong’s wife is one of the player wives who won the hearts of fans the most. 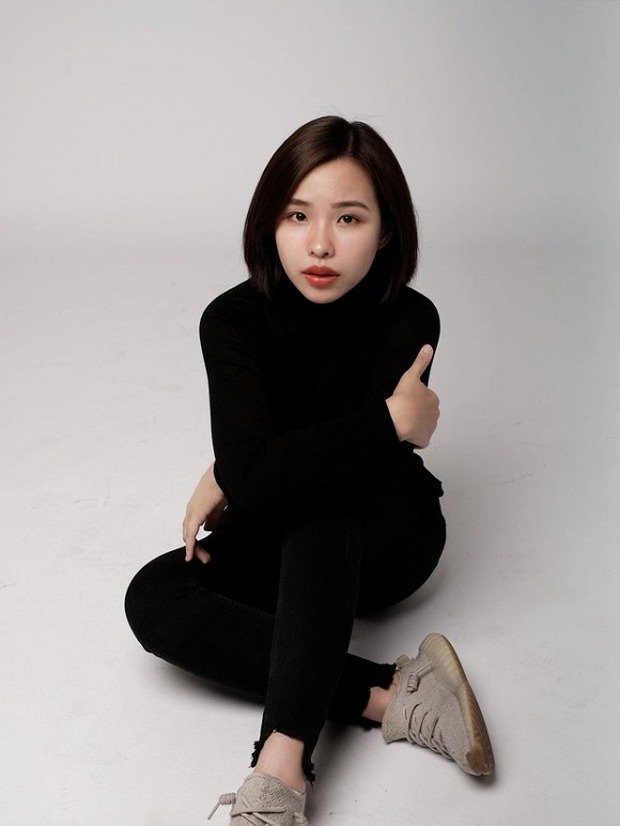 If the couple Duy Manh – Quynh Anh had a marriage proposal at the pedestrian street, Bui Tien Dung and Khanh Linh were no less competitive when they exchanged rings right at the grass field. In 2020, after going up to the podium to lift the V.League championship trophy with his teammates, player Bui Tien Dung suddenly pulled his girlfriend Khanh Linh to the podium to receive the award. Before the cheers of his colleagues, the midfielder knelt down and took out a diamond ring to propose to his wife. This is probably the most memorable match of his entire football career. 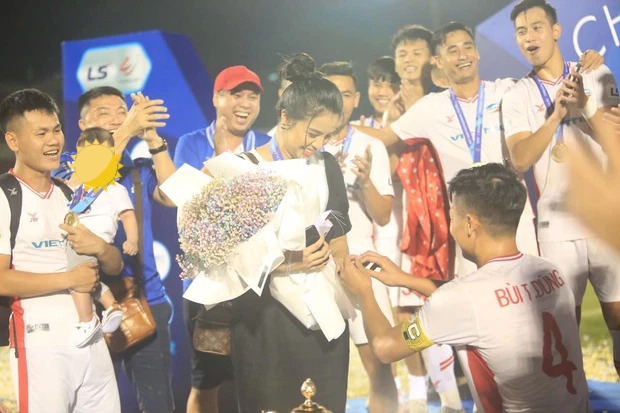 Proposal on the lawn of Bui Tien Dung

It is known that the couple started their love story in 2018 thanks to the charm of a friend. Once, Khanh Linh’s wife was hospitalized, Tien Dung actively texted and went to the hospital to visit her health even though she was not close to the other party. After many conversations back and forth, their love just started, no need to confess, just being together is enough.

The couple currently has 2 lovely daughters. On social media, Bui Tien Dung is very careful to show off pictures of his wife and two children, as well as leaving short but sweet sharing sentences, making fans jealous. Although the love story of the two sometimes faces many difficulties and obstacles, but ignoring the reputation and trying to understand each other better, the young couple has built a desirable family. 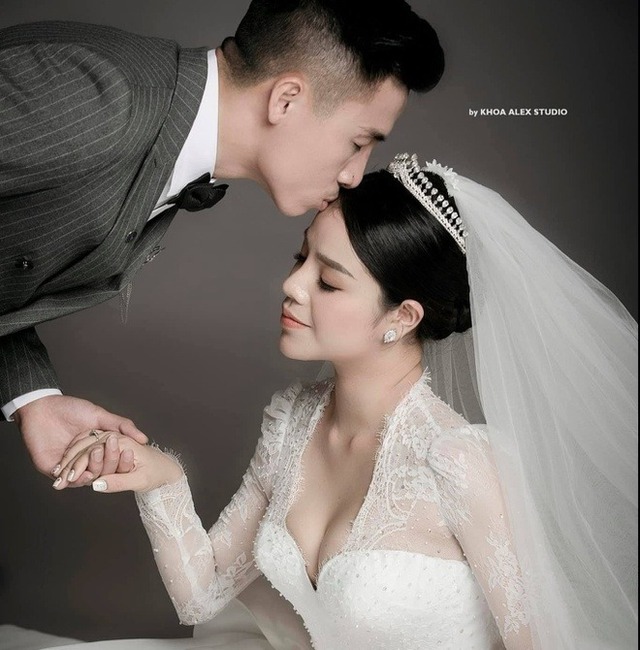 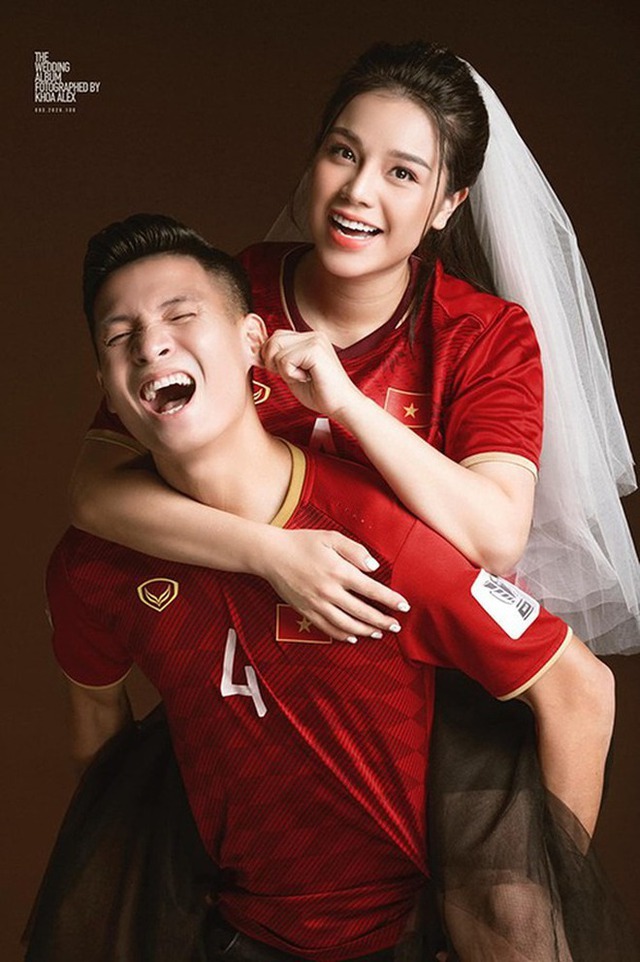 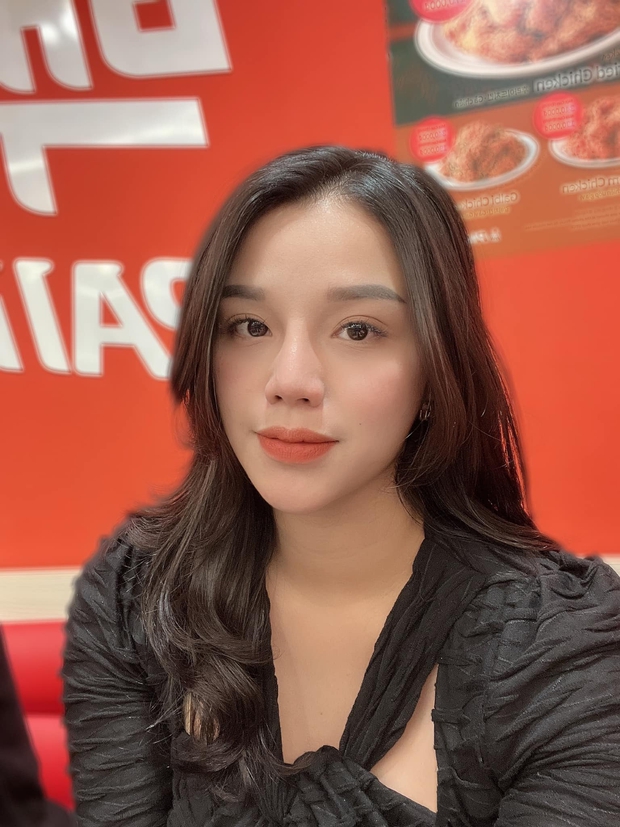 The simple love story of the player Van Quyet and the daughter of the former President of the Saigon Club – Nguyen Huyen Mi made many people love it thanks to its unobtrusive simplicity. The two got married in May 2015, now have a son named Soc, who is also the one who gave the ball to the referee in the first match of the Vietnamese team in this 31st SEA Games. 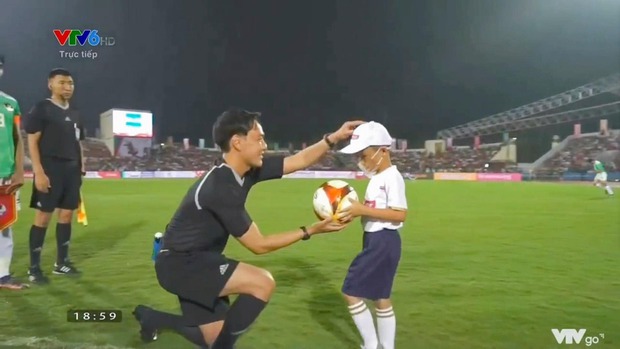 Baby Soc, son of Van Quyet and Huyen Mi while giving the ball to the referee at the pitch

Few people know, before having a very happy small family, Van Quyet and Huyen Mi had a love story just like the TV series. When she first met, she was not impressed with the guy, only saw that he was too serious. But with Van Quyet, it was different, at the first meeting, he was struck by lightning with a pretty girl on the same flight to Macau to compete in the 2014 World Cup qualifiers. Because her heart was accidentally stolen by her. So he decided to plan to cut down Huyen Mi and successfully bring her back to the palace.

In the early days of falling in love and then getting married, the couple also had difficulties because the love story with the players, who, early tonight, tomorrow night, always moving everywhere is not easy. However, because she understands her husband, Huyen Mi is always by her side, ready to support Van Quyet at any time. From a girl who did not understand anything about soccer, now Huyen Mi can understand all the rules of football. She is a model image of a player’s wife, a solid rear for her husband to feel secure on the field. 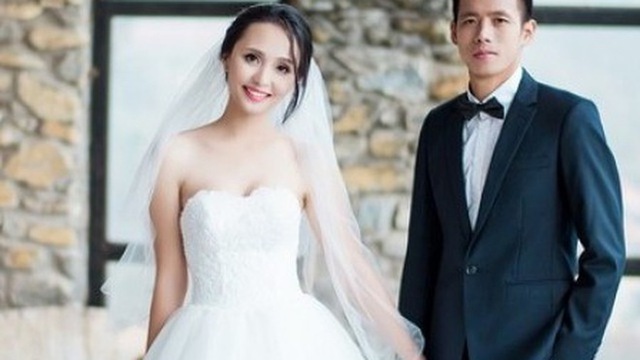 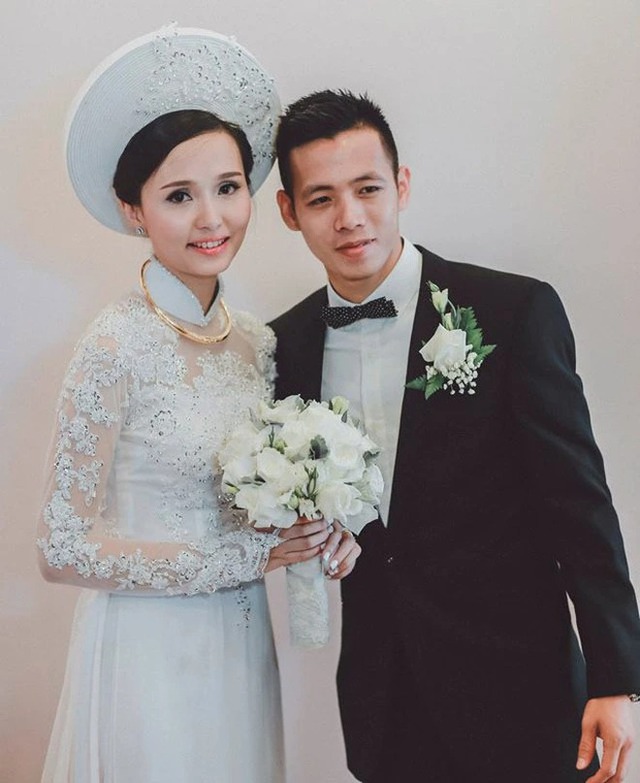 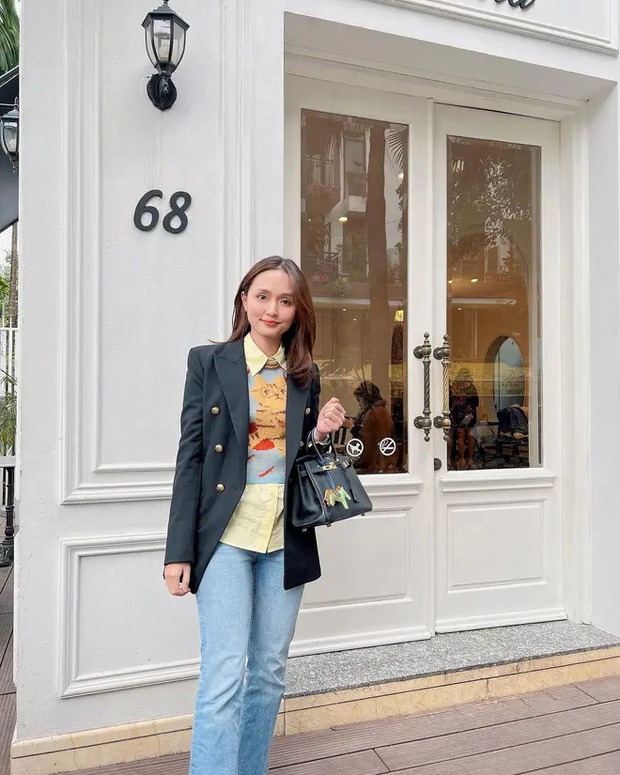 
According to BAI/ Design: Thanh Dat

You are reading the article The one who kept the secret until the end and married the fangirl who fell in love at first sight
at Blogtuan.info – Source: cafebiz.vn – Read the original article here
Tags
Vietnam team
May 22, 2022
Share
Facebook Twitter LinkedIn Tumblr Reddit VKontakte Odnoklassniki Pocket Skype Messenger Messenger WhatsApp Telegram Viber Line

SUVs are getting safer

As luxurious as the plane's business cabin 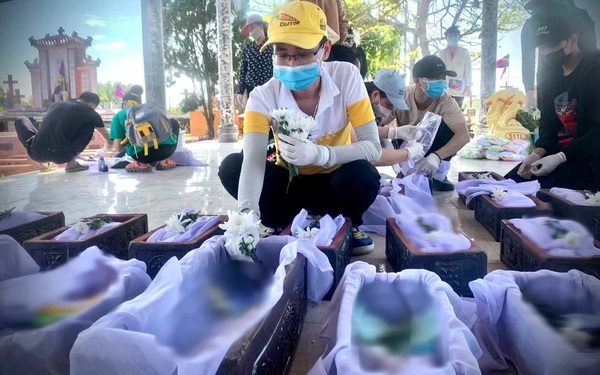 ”The last house” of tens of thousands of unlucky little souls 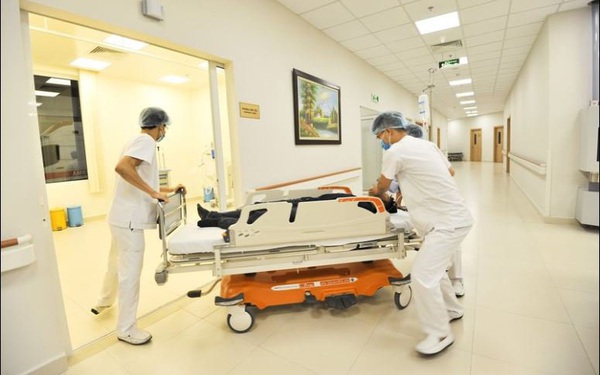 After eating a plate of pork liver, the man suddenly fell and had to be hospitalized 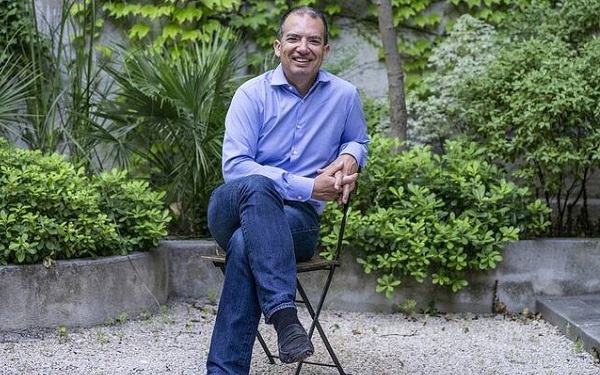 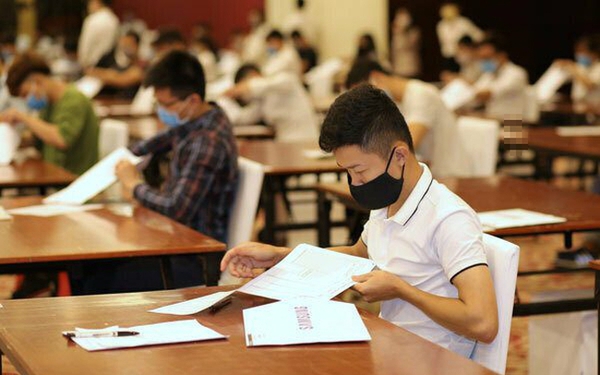 Looking at the last 4 majors, the candidates must have widened their eyes in surprise