A new albino Galapagos giant tortoise was born in the zoo in the town of Servion, Switzerland.

This is the first time an albino Galapagos giant tortoise has been born in captivity. The albino turtle is one of two newly born turtles in the Tropiquarium zoo, in the town of Servion, Switzerland. The other turtle is black, both born are the efforts of experts in the conservation program of endangered species in Switzerland.

The Tropiquarium Zoo has introduced albino turtles into the area where visitors have the opportunity to admire.

In the first post to share pictures about the new birth of albino turtles on social networks, the zoo representative said that the small turtle with pink red eyes and a yellow-white shell, is the new mascot of the zoo. Switzerland. The sex of the baby turtles has yet to be determined.

Newly hatched albino turtles after nearly 4 months, the mother turtle laid 5 eggs on February 11. According to the zoo, this species has a low reproductive success rate, currently they are still waiting for the remaining eggs to hatch.

The Galapagos giant tortoise is an endangered species, with just under 15,000 left in the world.

Conservation experts have performed many crossbreeding attempts to increase the turtle population. However, this is the first time they have recorded the birth of an albino turtle.

It is known that albino turtles are much rarer than humans or many other species. There is one case of albinism in every 20,000 people, while this rate is only one in 100,000 turtles.

The giant Galapagos tortoise, one of the world’s heaviest extant reptiles, is native to the seven islands of the Galapagos Islands, a volcanic archipelago about 1,000 kilometers west of mainland Ecuador.

3 little girls smoking cigarettes while dancing like in a bar

Stunned by the 75-year-old man’s banana tree planting, he set a world record

North Pole or Antarctica, which is colder? 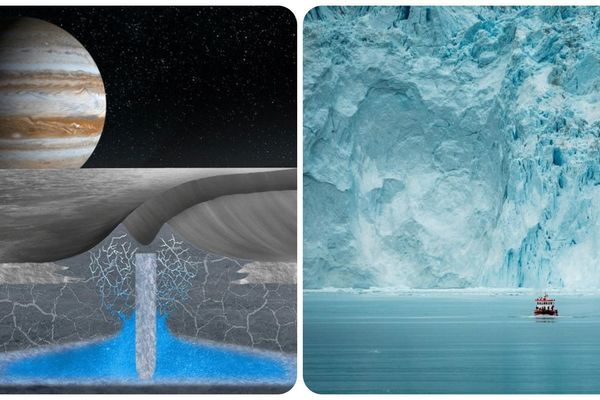 Blue snake, full of hair is a creature in the Thai swamp, the more you see it, the more terrifying it becomes