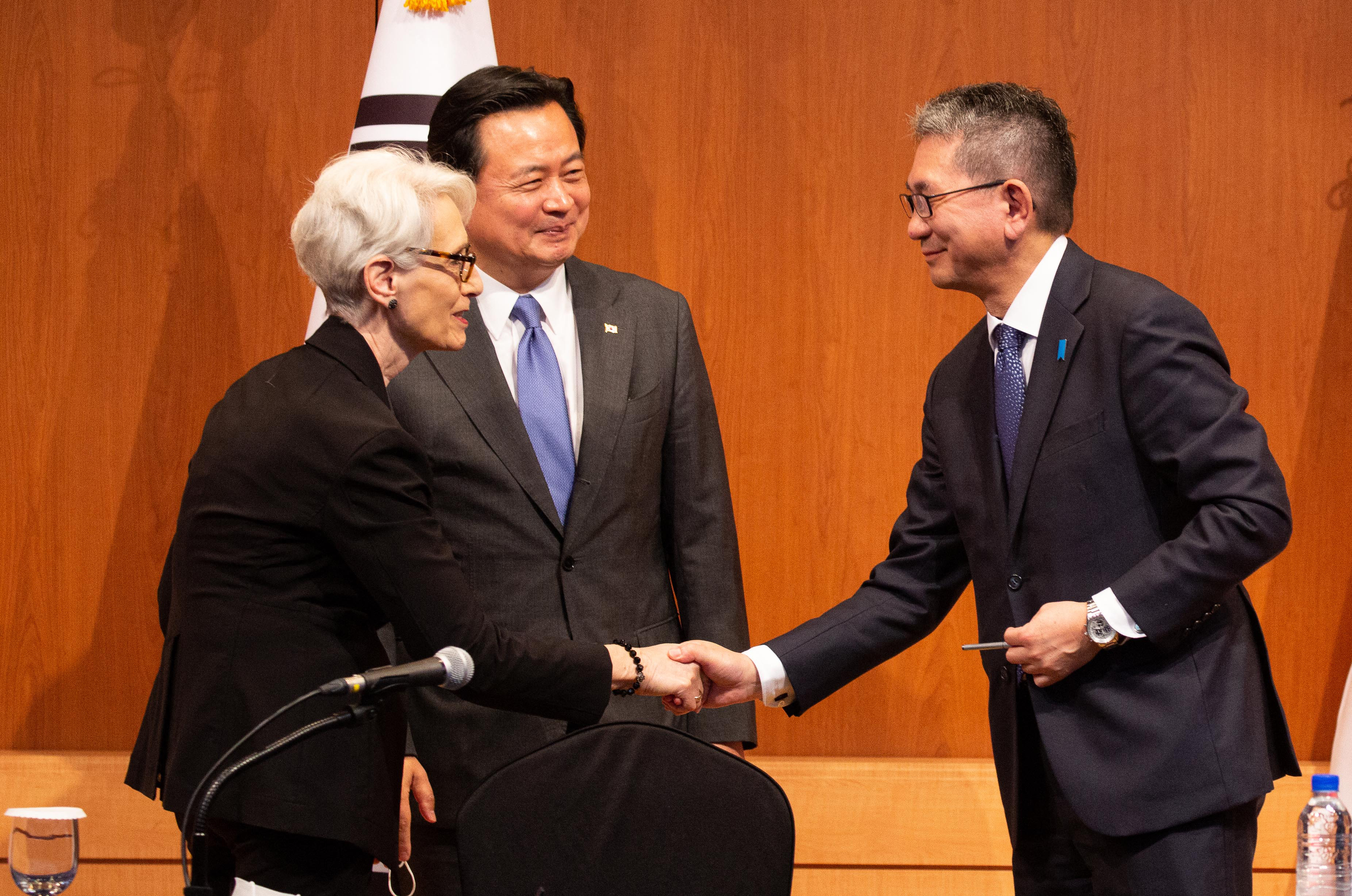 Deputy Foreign Ministers of the US – Korea – Japan shake hands after a joint press conference on June 8 – Photo: AFP

However, the sequential and synchronous deployment steps of the US side seem to be under a lot of pressure. The difficult situation for the US at this time lies in the identification of threats not only from North Korea and the Russia-China axis with more and more effective coordinated actions, but also due to unpredictable calculations from both sides. America’s treaty ally is Japan and Korea.

Although not clearly showing signs of synchronous coordination to shape a strategic triangle, in fact, all three countries Russia, China and North Korea are implementing many moves to put pressure on the collective indicators. US forces in Northeast Asia.

The event that North Korea launched three missiles at the end of May was almost right after the Russia-China axis conducted a joint patrol in international airspace over the waters of Japan and the East China Sea. These are also indicators showing the mutual opposition of all three countries to the moves to gather forces after the summit of the “Diamond Quad” bloc of the US – Japan – India – Australia in general and the visit to Vietnam. President Biden’s Northeast Asia in particular.

Not only that, North Korea’s recent launch of eight short-range missiles (SRBMs), which was carried out right after a short US-South Korea military exercise, not only brings a traditional deterrent message, but also easily relates to the relationship between the two countries. technology coordination between the Russia-North Korea axis.

Combined with China’s diplomatic pressures to oppose the escalation of tensions by both North Korea and the US-Japan-South Korea bloc, along with the co-veto of sanctions against North Korea (most recently on April 10). May 27), we can easily see the informal connection between Russia – China – Korea in Northeast Asia.

The separate calculations of Japan – Korea

Although the shaping of the “pressure triangle” of Russia – China – Korea has a positive impact on helping the US – Japan – Korea triangle to strengthen cohesion, in reality, the Japan – Korea axis and the The single calculation of these two allies has made it even more difficult for the US side to regroup in the region.

Specifically, despite great efforts, President Biden failed to mediate bilateral disagreements between Japan and South Korea, and failed to create a trilateral summit between the US, Japan and Korea in the past year. visit last May.

Not only that, the military connections between the three sides at this time are still maintained only by single bilateral exercises side by side with separate calculation of the interests of each ally that is somewhat above the architecture expected by the US. would like.

In particular, the Japanese side seems to have a tendency to want to pull the US to increase air and naval exercises in the northern area (Hokkaido archipelago) bordering Russia – an area where the Japanese side is trying to increase its military influence. while the US always minimizes its presence to avoid moves to escalate tensions with Russia.

Meanwhile, the Korean side in the counter-missile launch with the US has chosen to use the Hyunmoo II missile, a domestic product of the Korean side, in addition to the old US tactical missile system (ATACMS) which is already old. . This shows that Seoul affirms its technological autonomy as well as its ambition to export weapons in the future.

To sum up, although the Biden administration is making great efforts to gather forces in both the Northeast Asian and Southeast Asian rims, in the context of trends in non-traditional security approaches with the Japanese axis – Korea (through the announcement of the Indo-Pacific economic initiative IPEF) and ASEAN have not had many results, the influence of the “military belt” that the US is building in Northeast Asia is facing. great challenges.

This may be an important time for small countries like ASEAN to soon take advantage and exploit the advantage of neutrality to strengthen dialogue between the opposing poles in East Asia, creating an important agenda foundation. important part of the upcoming 19th Shangri-La Dialogue.

At the same time, officials from the three countries urged Pyongyang to return to the negotiating table and accept offers of COVID-19 support in the context that the country is dealing with the first outbreak of the epidemic.

Pu Ta Leng – Immerse yourself in the great forest stream 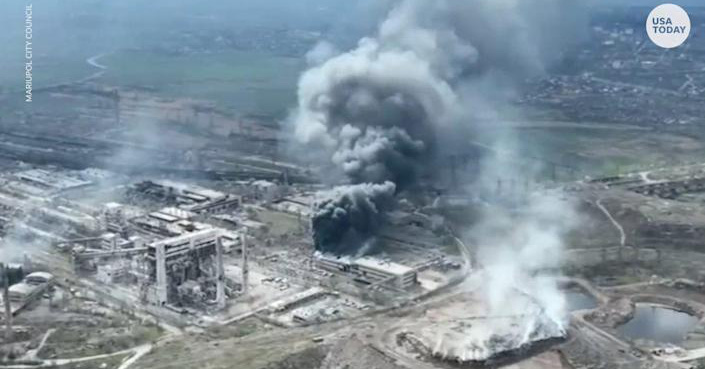 Mariupol situation on April 23: Russia makes another offer at the Azovstal plant; opportunity for Russia to go further 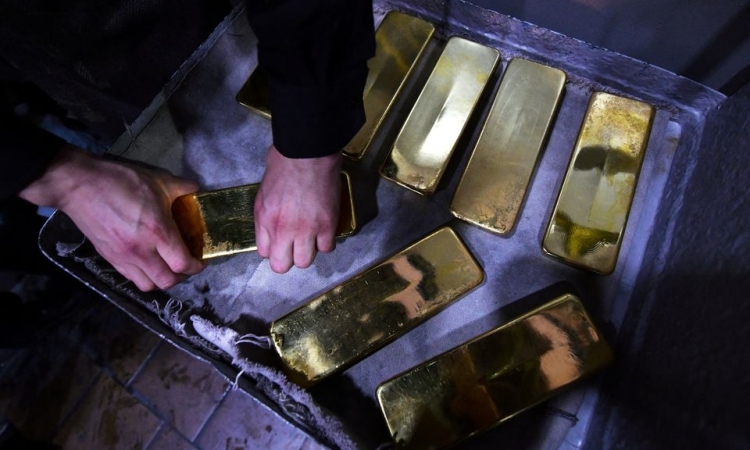 US imposes sanctions on 2,300 tonnes of Russian gold 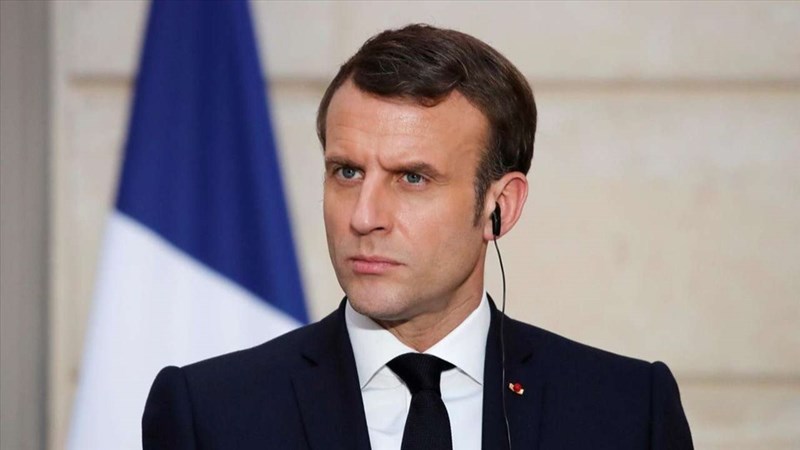 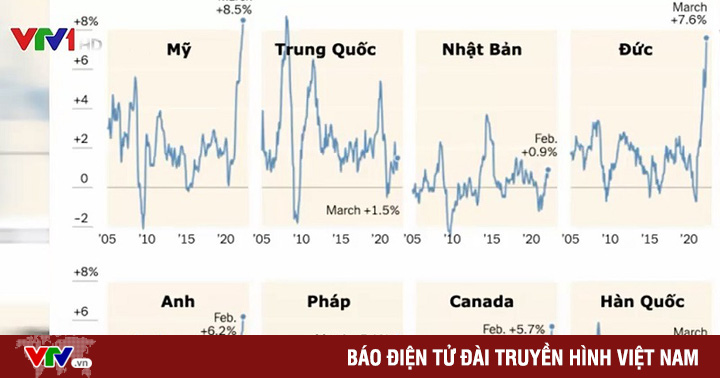